June is here and with it comes Summer. Here are some of the industry events taking place this month:

Help support the industry by attending these events. A lot of planning and hard work goes into making these events a reality.
For more information on these events, visit our Events page. Additional information, including links, is included with each Event entry. To add an event, please Contact Us.

As a reminder, there will be a Safe Moving webinar taught by Wayne Winton later today. It will begin at 6:00 PM EST/5:00 PM CST/4:00 PM MST/3:00 PM PST. The registration link can be found here.
We are also happy to announce another Webinar for next Thursday as well:

Stay tuned to the Webinar page for registration links and additional information.

We have launched the tubular lock section of the Key Bitting Specifications page with the following key bitting specifications:

In the coming weeks and months, we will add more tubular key bitting specifications. These additions will include:

Happy Memorial Day! Here are some of the top locksmith-related news items of the past week:

Paxton, a global brand of electronic IP access control and video intercom solutions, has launched a new web-based user interface for its Net2 access control system. Net2Online makes Net2 accessible from any device with an internet connection and comes as a free feature with Paxton’s Net2 Pro software. This ensures Net2 Pro is futureproofed, while making site access for users even easier, according to the company. [Read More via Security Sales & Integration]

Tenants at a property in New York City just struck a deal in what is both a wildly reasonable ask but also a crucial development at a time of increasing surveillance—their landlord has to give them physical keys to their building. [Read More via Gizmodo]

Kisi’s “hybrid mode” allows a smartphone to update its credential when connected to the Internet and can unlock a door even when it’s offline. [Read More via Security Sales & Integration]

I realize that sometimes my posts get into the real nitty-gritty of doors and hardware, but this is often crucial information for someone in the field – especially when the answer can not be found in a model code or standard.  So here’s today’s question…When a pair of fire doors has manual flush bolts and no closer on the inactive leaf, is a coordinator required? [Read More via iDigHardware.com] 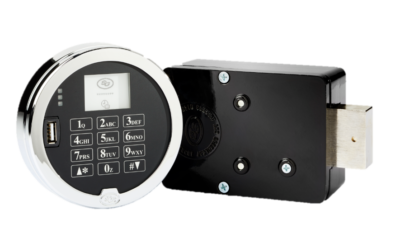 Sargent and Greenleaf (S&G), a manufacturer of mechanical and electronic locks, reveals its Digital Vault Lock. The Digital Vault Lock is an electronic time lock that utilizes a secure online interface and user-friendly software to allow for increased flexibility and security for convenient vault access, according to the company. [Read More via Security Sales & Integration]
For more news stories like this, please visit our News page.

We have updated the Biometric Readers page in the Library using our new format.  We have new literature and manuals for the following manufacturers:

In the “Resources” tab, we have two papers on Biometrics:

We have partnered with Wayne’s Lock Shop and Toronto WebWorks to offer locksmith webinars. Starting later this month we will begin offering 2-3 hour locksmith-related webinars. We have created a dedicated page on the site to showcase upcoming webinars. This page will contain webinar topics, dates, times, and registration information. Upcoming webinars include:

In the near future, dates will be added for the following topics:

Webinars are web-based seminars (web + seminar = webinar). Webinars allow anyone with a computer/tablet and an internet connection to attend a class, presentation, lecture, workshop, etc.
Consider the problems that locksmiths typically encounter when seeking continuing education related to the trade:

No matter the case, webinars are one solution available to potentially solve these problems and provide locksmiths with continuing education opportunities.

There are great benefits associated with the use of webinars for continuing education. They include:

In 2011 ALOA tried their hand with webinars. From an attendee’s perspective, I considered it a resounding success. I attended 3 classes offered and I recall that each one was filled to capacity; caps being set at either 25 or 35 attendees per class. Additionally, multiple offerings of the same class were offered which mean that, at the very least, the demand was there from the start.
ALOA is not the only one in the industry to try their hand at webinars however. ASSA ABLOY currently offers 58 online classes (essentially webinars) via their ASSA ABLOY Academy which are, by all indications, very popular. Other manufacturers, such as CDVI, have offered webinars for product training in recent years as well. Recently, Wayne Winton has offered and self-hosted multiple webinars via WaynesLockShop.com.  Having attended all of the aforementioned webinars, I can state unequivocally they have been well-attended and well-received, indicating that webinars are still viable and desired.

From ALOA’s standpoint there are two very favorable benefits: revenue and reputation.
First, webinars would result in additional revenue for the association. Using historical metrics (25-35 attendees at $35 each), the Association stands to generate $875 – $1225 in revenue with each webinar. I am not privy to ALOA’s costs associated with conducting webinars but typical webinar “software” currently runs ~$40 a month for unlimited classes, typically capped at 25 attendees per class. Coupled with typical administrative costs and instructor fees, I find it hard to believe that ALOA couldn’t make money with each webinar offered.
Second, if ALOA were to re-take a proactive stance towards making education available online via webinars then that certainly would improve their reputation by way of increased membership benefits.

Perhaps the biggest criticism of webinars is that they undermine in-person classes. The reasoning behind this criticism is that since you’re making education cheaper and more ubiquitous, there will be a reduced demand for in-person classes, which could have larger underlying effects such as reduced ALOA Convention attendance. Wayne Winton offered a great rebuttal to this. To paraphrase, Wayne says that since nothing can ever realistically compete with hands-on classes and training, it’s not really a threat. He’s absolutely right.
Nevertheless, if we conceded this argument – that webinars undermine in-person classes – a viable solution would be to offer topics/subjects that aren’t typically offered by in-person classes or utilize niche topics that would never be offered by in-person class. By adopting this strategy you would eliminate any possibility of competition, indirect or not.
Additionally, a solid argument could be made that even if you did cross-over topics, webinars could act as excellent “teasers” for an in-person class. If someone is able to get a cursory overview of a topic, such as frame removal and installation, they may be more apt to take an in-person class because they’ve seen that the subject/topic isn’t that daunting. Some people would rather $25-35 for a webinar on frame removal and installation to get a “taste” of things before spending $285 – $435 to attend an in-person class, plus all other associated transportation and lodging costs. In other words, webinars could feasibly act as a promotional tool for in-person classes.

We have updated the Key Machines and Punches page in the Library using our new format.  We have new key machine and punch manuals for the following manufacturers:

In the “Resources” tab, we have a guide to Kaba Ilco Key Machine Cutters as well as multiple key machine and punch-related videos from SE Lock and Key and Wayne Winton.

In the past we’ve showcased other reference sources on this website. We’ve showcased blogs and apps as well as communities, such as Locksmith Nation, and other reference websites, such as Wayne’s Lock Shop. Continuing with this tradition, we wanted to take a moment to showcase SE Lock and Key’s YouTube channel, specifically the live steams.
SE Lock and Key is no a stranger to this website, there are numerous links to Jason’s (the owner of SE Lock and Key and friend of this website) videos in our Library. Jason’s YouTube channel contains over 600 locksmith-related videos. Often light-hearted and jovial, these videos provide a wealth of information and insight into the trade.
One aspect that makes Jason’s channel unique from the rest is that every Wednesday at 7 PM EST/6 PM CST and Saturday at 12 PM EST/11 AM CST, Jason live streams from his shop for ~1 hour.  During these live streams, Jason shares recent jobs, stories, information, and even takes questions. If you can’t make one of the live streams, Jason archives each stream and makes them available on his channel. No matter when you view them, these streams are truly a fountain of education for other locksmiths. Subscribe to Jason’s channel and set a reminder on your calendar to check out the live steams. You won’t be disappointed!