We’ve added a decoding worksheet for A3 small format interchangeable cores (SFIC) to our Pinning and Decoding Worksheets page in the Tools section. You can use this worksheet when removing pins to decode an SFIC using an A3 system. The worksheet allows you to plot each pin position and has all measurements for A3 pins to reference. It also has a formula built in to help you quickly decode the control key. 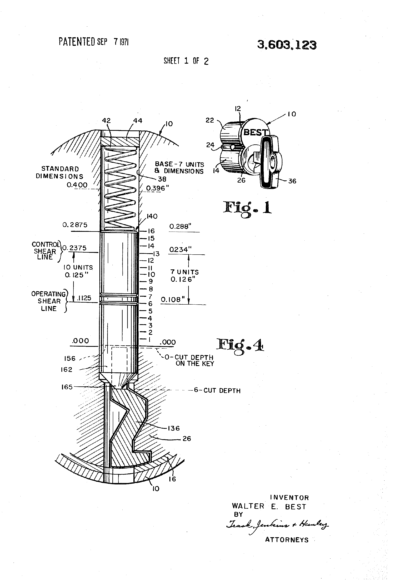 Walter Best applied for a patent for what would become the A3 system in 1968. Granted in 1971, this patent was BEST’s first venture into a single step progression system. Unfortunately, the increment size was too small. Worn cores were especially vulnerable to key interchange and jamming (due to the small size of a #1 master pin). Eventually the A3 system was replaced in favor of A4, which utilized a larger increment size while still allowing for single step progression. There are still some A3 systems out there and at least one manufacturer was still generating new A3 systems as late as the early 21st century. Suffice to say, this worksheet is still useful!