The Meat and Potatoes

Apologies for the delay between the day 2 and 3,4 posts, Thursday and Friday were the meat and potatoes of the convention and I’ve stayed busy. Thursday I was in a class all day learning more about Large Format Interchangeable Cores. The instructor, Bill Lynk, did a phenomenal job of covering a large variety of LFIC types in the span of 8 hours. ASSA, Corbin Russwin, Medeco, Yale, Sargent, and Schlage LFIC’s were covered in great detail and some attention was given to BiLock, Mul-T-Lock, and Ilco LFIC variants. If you ever get a chance to take one of Bill’s classes on LFIC or SFIC, do so. If you are unable to make a trip to attend one of his classes, he has 3 books available at the ALOA online store. I’ve had all 3 for the last 8-9 years and they are a wealth of information. 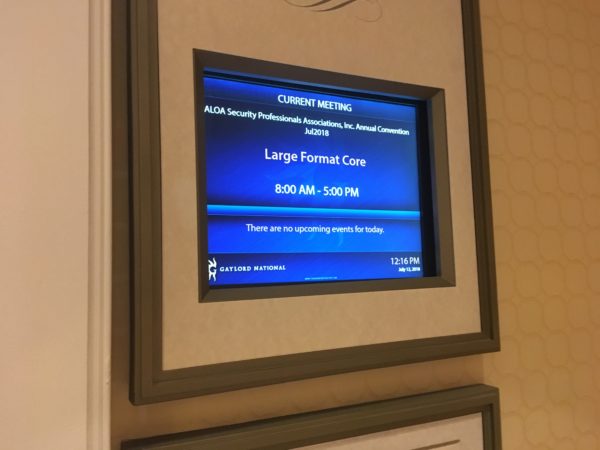 Thursday was capped off with the “Kickoff Party”. I had a great time there. I arrived at 7 and stayed until 10:30 or so. I got to meet a lot of new people as well as some I had known from places like ClearStar and LinkedIn. This was, by far, the highlight of my trip.

Friday morning started with the ClearStar breakfast, an informal meeting of ClearStar members shortly before the membership meeting. From there, everyone migrated to the Membership Meeting which was decently attended. This was my third membership meeting and just about every seat was filled. It definitely was reassuring to see.

At 10 AM the Expo opened up. I made three separate trips walking around and was surprised by the attendance. I am not sure if the layout had anything to do with it but it seems like you constantly had to be aware of your surroundings because there were so many people navigating the aisles and you didn’t want to get in someone’s way. I didn’t get a chance to visit all booths, truth be told automotive and safe vendors don’t much apply to my company’s business model, but it was nice to see that all “sects” of locksmithing were well represented. 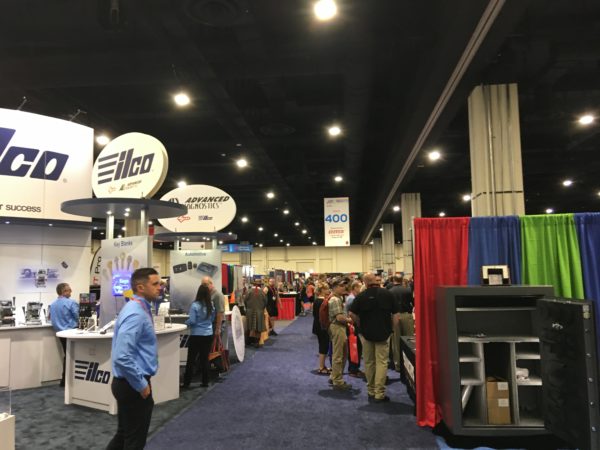 I only took 1 picture inside the convention because I was so busy and pre-occupied with visiting various vendors on a mental checklist I had made. The ASSA ABLOY booth, which featured areas for Medeco, Mul-T-Lock, ASSA, and Abloy, was by far the shining star of the show, in my opinion. Most impressive were the various hybrid cylinder options as well as battery powered, wireless locks. As someone that started in this industry by doing access control jobs, I cannot deny the benefits of these locks. No pulling wire, no additional hardware in most cases (beyond perhaps a new lock itself), and wireless capabilities – all at a price point either lower or comparable to a traditional access control solution.

One product/vendor impressed me the most above all overs, though. I don’t do access control anymore, which I don’t have a problem with, but AirAllow had one of the most intriguing products demonstrated at their booth that I have ever seen. If you think of a traditional access control system, what components come to mind? Wiring, panels, power supplies, electronic hardware, etc. AirAllow has a platform that eliminates most of the wiring in favor of a lithium-battery powered door controller. The rep told me that, depending on the circumstances, this battery can last upwards of 2 years. I do not know the legalities as far as the licensing required to install such a system (low voltage license or not) or even placing lithium batteries behind walls or above doors but it’s intriguing for the simple fact that you could essentially install an access control system in an opening in, realistically, less than an hour and at a price that can beat perhaps even hybrid-cylinders. If I were still involved in access control, I would be all over this system. But, since I am not, I can only say the following: if you are involved in access control, it would be in your best interest to check this manufacturer out. They may be onto something here.

After the show, I relaxed for a bit before attending my final meeting: the State of the States. This meeting was a presentation/discussion with ALOA attorneys regarding state licensing as well as locksmith scammers. While sparsely attended, there was very good discussion between those who attended. Was the solution to the problem discussed or presented? Time will tell but this much is true: there were very good points addressed and I hope this forum continues at future conventions. Furthermore, I hope ALOA does a better job of promoting it. This is something that everyone in the industry needs to be involved in.

Tomorrow we head back for home. I had a great time here but it’s time to get back home and get back to work. Next year will be in Las Vegas. I heard many rumblings about the heat in Vegas but as someone who has attended an ALOA convention in Vegas I will say that dry, desert heat has NOTHING on humid heat; it’s not even a contest. I look forward to the convention, the meetings, the kick off party, but most of all, a reprieve from the hot and humid Southern climate. T minus 13 months and counting. Till then, ALOA, well done!