As a quick recap from Part 1, compared to integrated units, standalone exit alarm units are usually the more cost-efficient option. They are surface-mounted and generally do not require any modifications to the door or frame beyond the mounting screws for the hardware. Additionally, the existing lock(s) and door hardware are able to remain untouched.
There are plenty of options for standalone exit alarms. Here are some of the most popular: 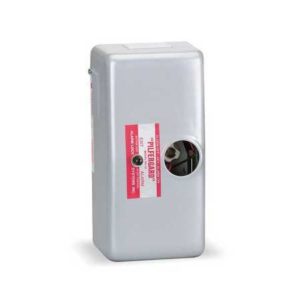 PG10 is door-mount standalone exit alarm that provides keyed arming and disarming from either side of the door. The PG10 is available for single or double doors. An optional AC power supply is also available. Other features include: 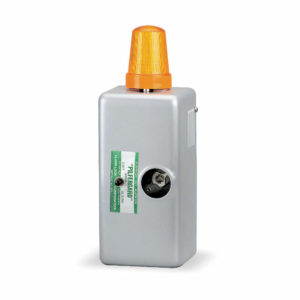 LL1 is a PG10 with an additional strobe light for easy identification as well as a choice of system controllers. 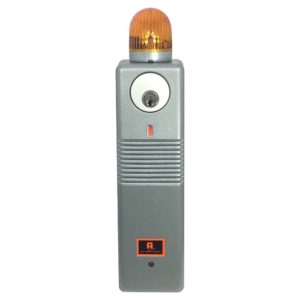 Other features of the PG21 include:

While narrow-stile, the PG21 can be mounted on standard size doors as well. It is available in metallic silver and duronodic finishes and is armed/disarmed by a standard mortise cylinder (exterior control is possible via an optional rim cylinder). Other options for the PG21 include continuous alarm, minute shutdown with auto reset and exit/entry delay, a strobe light, and an AC power supply.

The PG30 is very similar to the PG21.
Rather than cylinder control, the PG30 offers keypad control in addition to the following features:

The Arrow 130N is perhaps the most economical standalone units currently available on the market. It’s features include: 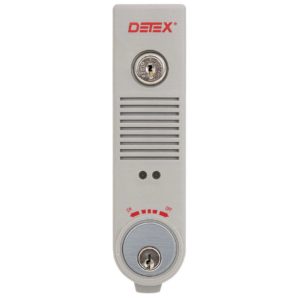 The Detex EAX-500 is arguably one of the most popular and recognizable standalone exit alarms in North America. Features of the EAX-500 include: 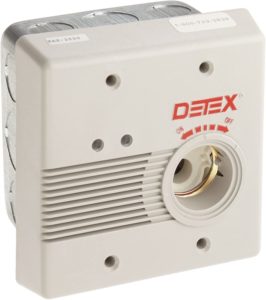 The Detex EAX-2500 is a hardwired exit alarm that will fit in a standard 4″ x 4″ outlet box. In addition to a battery back up, the EAX-2500 offers the following features: 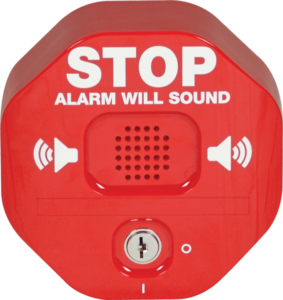 Safety Technology International’s Exit Stopper is a standalone exit alarm that can be door or wall-mounted. The Exit Stopper uses a polycarbonate housing available in red and green. Features of the Exit Stopper include:

As their name implies, exit alarms sends notification of an an egress, or exit, via an alarm. There are multiple reasons why building occupants would need to be made aware of an open door:

No matter the reason, exit alarms can protect against and potentially prevent situations with serious consequences.

Exit alarms range between 85-105 Db loud. Arming and disarming of is usually controlled by keyed cylinders but keypad options exist as does automatic re-arming. Remote arming is also possible on some models. Exit alarms can be incorporated into existing access control systems by providing alerts and monitoring capabilities. These alerts can then be used to trigger other hardware, such as surveillance cameras.
‘Prop alarms’ are a type of exit alarm that allow temporary egress without an alarm. Prop alarms allow users to set a period of time that a door is allowed to be open, known as an exit delay, before the alarm is activated. Typical exit delays range anywhere from 15 seconds to 4 minutes in duration.

Exit alarms fall into one of two categories:

Standalone units function as exit alarms only; that is their only purpose. The Detex EAX-500 is an example of a standalone unit. 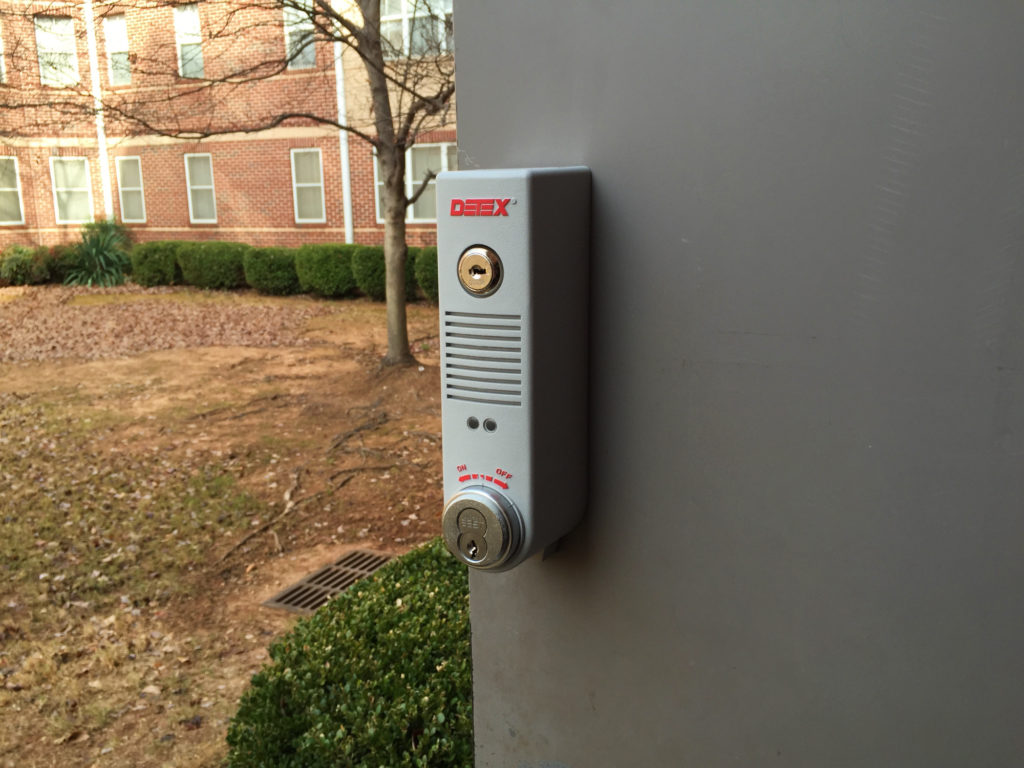 Integrated units incorporate exit alarms into door hardware, such as exit devices or multi-point locks.
Compared to integrated units, standalone units are usually the more cost-efficient option. They are surface-mounted and generally do not require any modifications to the door or frame beyond the mounting screws for the hardware. Additionally, the existing lock(s) and door hardware are able to remain untouched.

Standalone units fall into one of two categories:

As the name implies, door-mount units are mounted onto the door and are typically powered by 9-volt batteries. The aforementioned Detex EAX-500W is a door-mount unit. Wall-mount units mount to the wall near the door. The Detex EAX-2500 is an example of a wall-mount standalone unit. 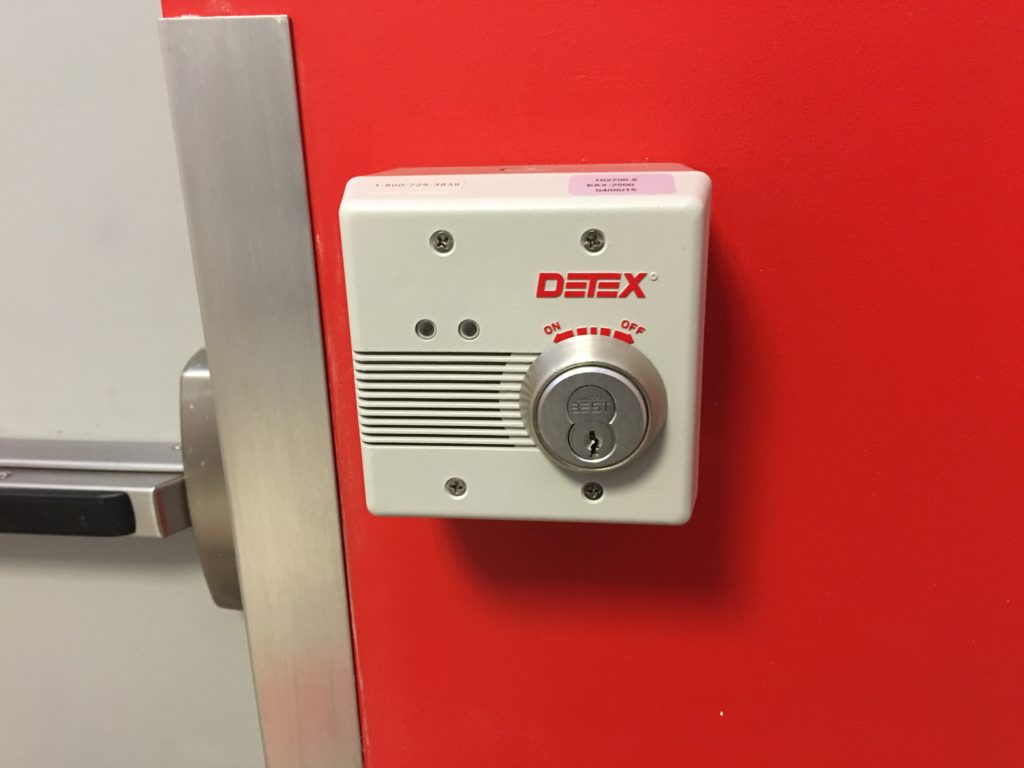 Wall-mount units are usually powered by a low voltage transformer and feature a battery backup.  Additionally, wall-mount units can be tied into a monitoring or access control system to notify of an egress. I personally prefer wall-mount options when possible for a few reasons:

Integrated exit alarms are overwhelmingly found in exit devices. The Detex V40 is an example of an integrated unit. 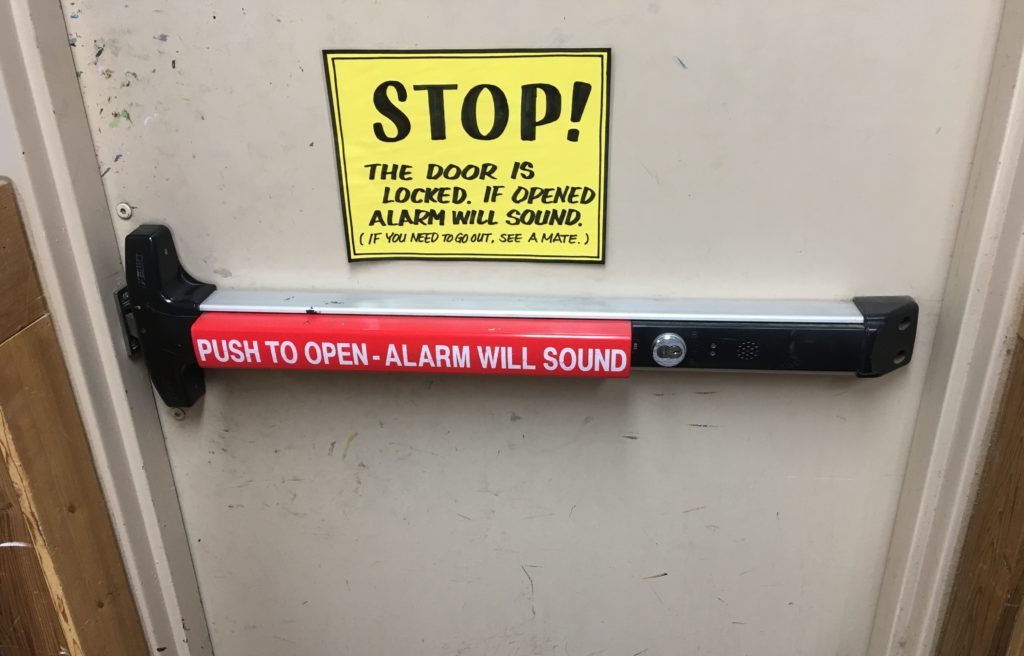 Integrated units can also be found in single and multi-point locks as well as electromagnetic locks (maglocks). Maglocks utilize exit alarms for delayed egress solutions. I will address delayed egress in a separate article at the end of this series due to it’s complexity compared to all other exit alarms.
While integrated exit devices primarily come from the factory equipped with alarms, aftermarket kits are available. Multiple manufacturers offer aftermarket kits that locksmiths can install in the field. The installation of these aftermarket kits typically involves nothing more than a cover plate swap on the exit device.

This is the first in a series of articles covering exit alarms. Next week I will explore options for standalone units. For more information please see the Exit Alarms page in the Library.

We have updated the Exit Alarms page in the Library using our new format.  We have new literature and manuals for the following manufacturers:

We have also included a link to Detex’s Training and Support Videos. Detex has produced and hosted dozens of videos covering the application, installation, and servicing of their products. It’s a very comprehensive and valuable training resource.
Next Monday we will publish the first article in a multi-article series covering all things exit alarms.