This article originally appeared in the February, 2015 edition of Keynotes.

I received a work order that an exterior door restricted to card swipe access was not releasing when an authorized card was used. The door had a Von Duprin 99 series rim exit device used in conjunction with an older Von Duprin 6100 series electric strike (Figure 1). 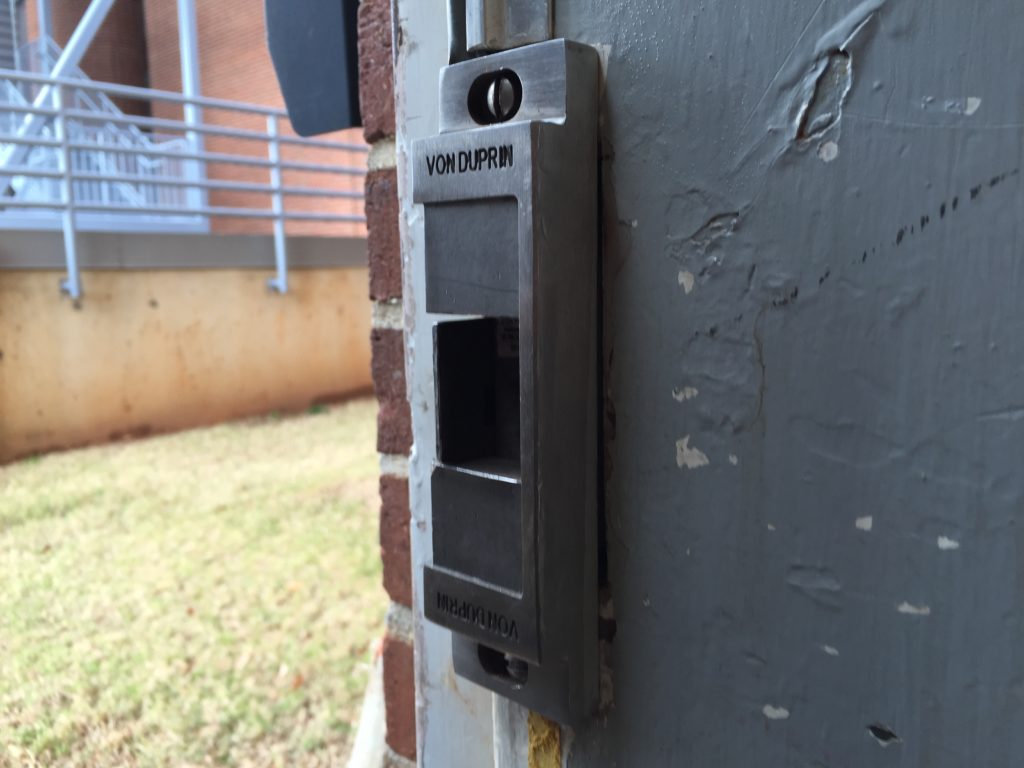 After troubleshooting, I removed the mounting screws, disconnected the strike, and determined that the electric strike, set for fail secure, was receiving proper voltage/amperage (Figure 2) when an authorized card was used, but the electric strike would still not release. At this point, I want to stress that assuming is never a good idea. Always verify the correct voltage with a meter and check that the power supply can provide ­the rated current or amperage required by the strike. Also verify that the wire size and length is adequate to prevent too great a voltage drop. 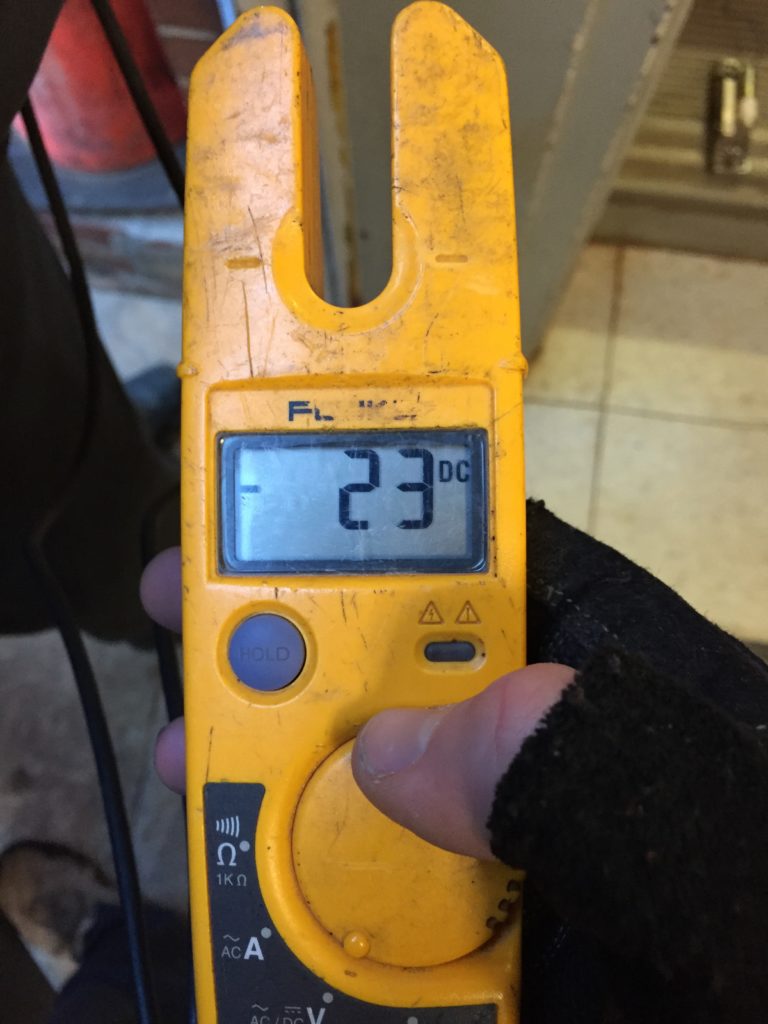 Visual inspection showed no damage to the external components of the electric strike or foreign objects within it preventing normal operation. Sometimes, especially on college campuses, individuals come up with makeshift ways to keep doors open and/or unlocked, and the items used can inadvertently cause otherwise fine door hardware to not work by jamming key components. An electric strike, believe it or not, is a very, very simple device. The only moving part in this strike aside from the keeper’s spring, and nearly all others, is the solenoid. That had to be culprit.

I then reconnected the electric strike to its power source and swiped a working card a few more times. Each time I held my finger to the solenoid — which is placed on the outside of the electric strike on this particular model — I felt nothing. You should feel and hear movement when a working solenoid is energized, but more on that in a moment. Case closed: we had a solenoid that had failed, and it needed to be replaced. But could it?

How Solenoids Work with Electric Strikes

Solenoids are essentially electromagnets. The main housing (Figure 3) of the solenoid contains coiled wire and works in conjunction with an armature. 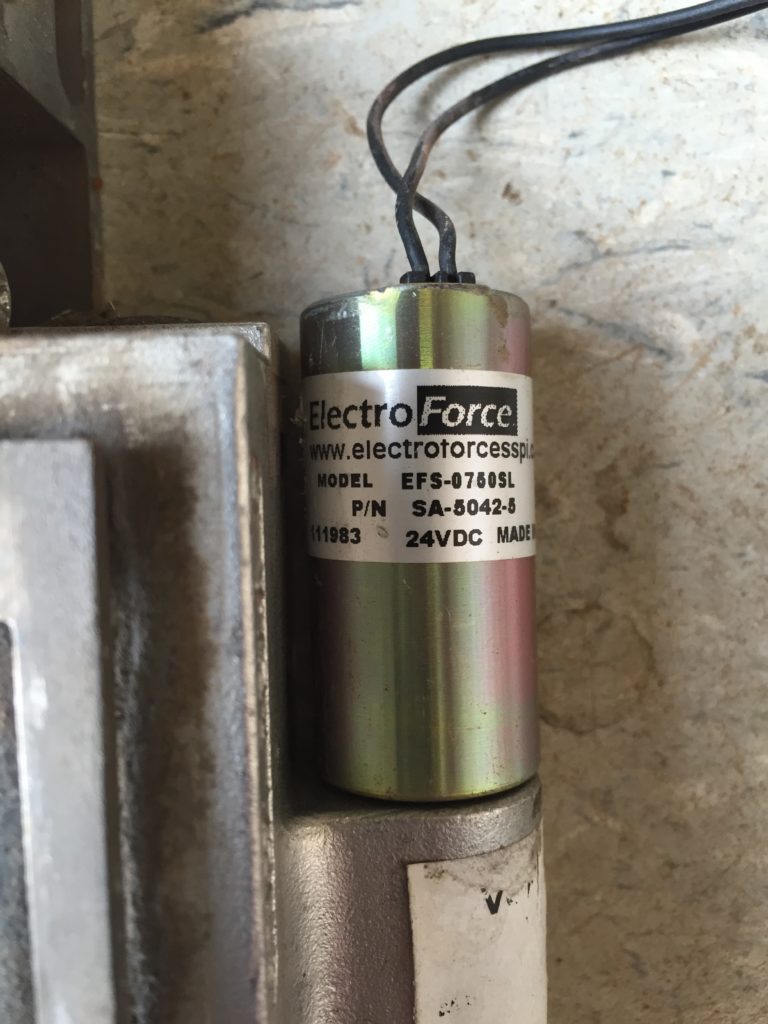 Armatures, sometimes referred to as plungers or slugs, are cylinder-shaped and contain ferrous metal, which is magnetic. Like all electromagnets, when current is applied, the coiled wire generates a magnetic field. This causes the armature to move up or down, depending on the design or intended usage of the solenoid. For example, the Von Duprin 6100 series electric strike I am fixing is fail secure. When not energized, the armature rests in position that prohibits the electric strike’s keeper from moving. When the solenoid is energized, the armature is attracted to and therefore lifted by the magnetic field produced by the coil, and the keeper is then able to move momentarily.

Luckily for me, I had a 6000 series solenoid replacement kit on hand (24VDC – part no. 050240). The kit, also available in 12VDC (part no. 050237) and 16VDC (part no. 050239) depending on the system requirements, comes with everything you need to get you back in running order: the solenoid, the armature, the spring and a plastic washer. One thing to note, however, is that if you ever have a broken solenoid spring on a 6000 series Von Duprin electric strike, they can be ordered separately (part no. 968713). This saves you quite a bit of money compared to ordering the complete kit itself. It should also be noted that the same solenoid replacement kit can be used on any Von Duprin 6000 series electric strike so long as the voltages match.

Now, installation can be rather straightforward or involved depending on the condition of the armature. Allow me to explain.

Fail secure is a normally open circuit. The armature is only exposed to the magnetism from the coil briefly and intermittently (whenever someone swipes his or her card and the electric strike is energized). I compared the existing armature to the new one (Figure 4) and found no change in size or any associated wear or tear that warranted the process of its removal and replacement. Change in size? Read on. 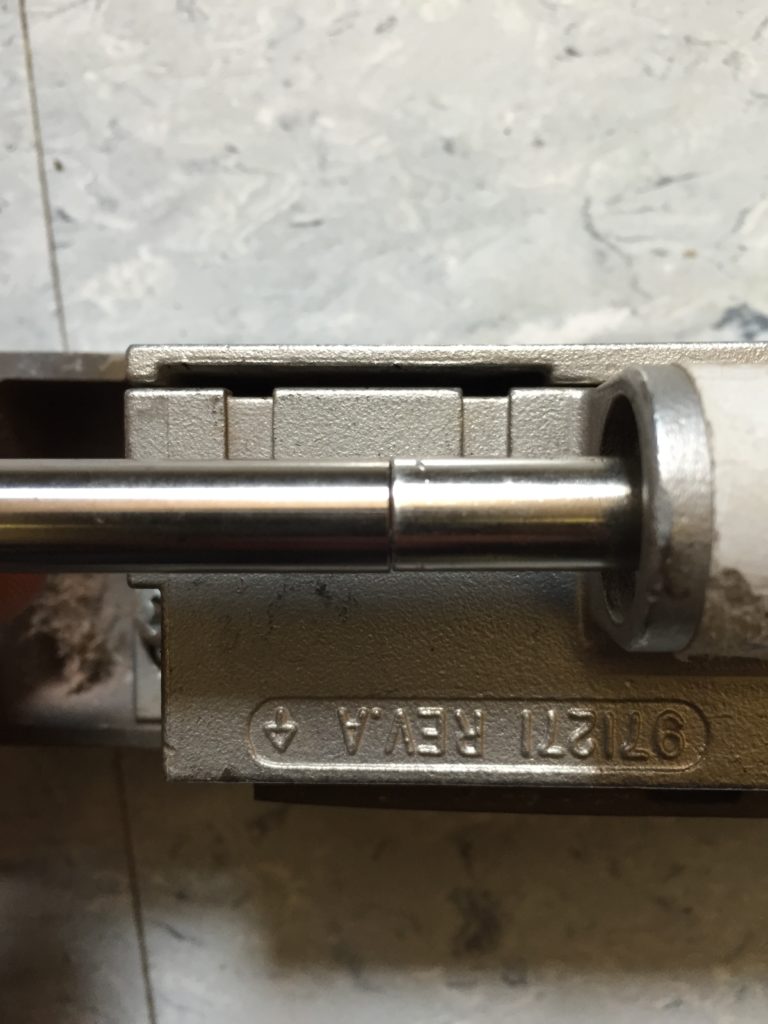 Fail safe electric strikes are continuous duty. The armature is exposed to the magnetism from the solenoid constantly until someone swipes their card and breaks the circuit temporarily, thus allowing the armature to move. When the timer on the system reenergizes the solenoid, it’s exposed to the magnetism again until someone else swipes a card. Why does this matter with regards to replacement? The constant exposure to the magnetism can actually cause the armature to expand and thus potentially cause the electric strike to malfunction. I couldn’t believe what I was seeing the first time I encountered this, but a phone call into Von Duprin’s tech support department confirmed that was the case.

Whatever your situation may be, the armature cannot be removed without first drilling out a roll pin (Figure 5). The roll pin holds a part that interacts with the armature and essentially locks it into the electric strike. From there, it’s a straightforward process. I didn’t need to replace my armature and, with respect to the readers of this website, I wasn’t going through the process just to show how it was done (If any of you want to send me a spare 6100, I’ll be more than happy to do a complete write-up for a future article!). With that said, let’s do a walk-through of a typical 6100 solenoid replacement installation that does not require replacement of the armature. 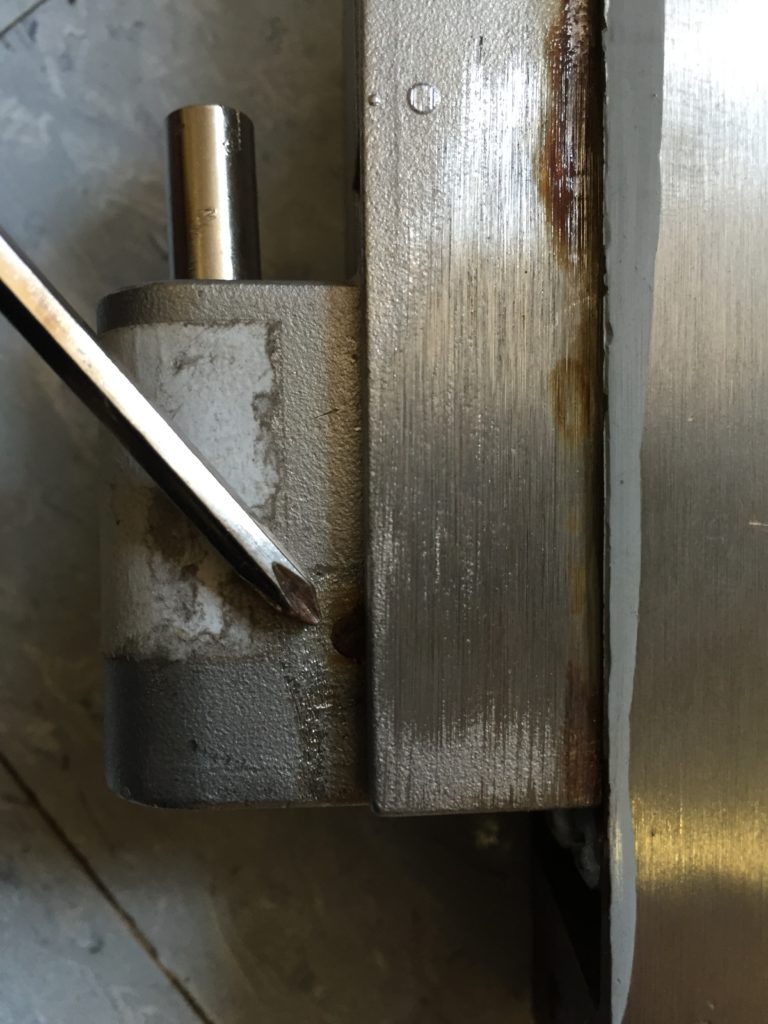 Remove the electric strike’s mounting screws and disconnect it from the power source. Solenoids only operate when current is applied, so — unlike a capacitor — you don’t need to worry about potential shock hazards when working with them once the power source is eliminated. Unscrew the solenoid (it should only be hand-tight and require no tools) and remove plastic washer and spring.

With the solenoid removed, it was time to install the replacement. Figure 6 shows an expanded view of how the kit should be replaced. 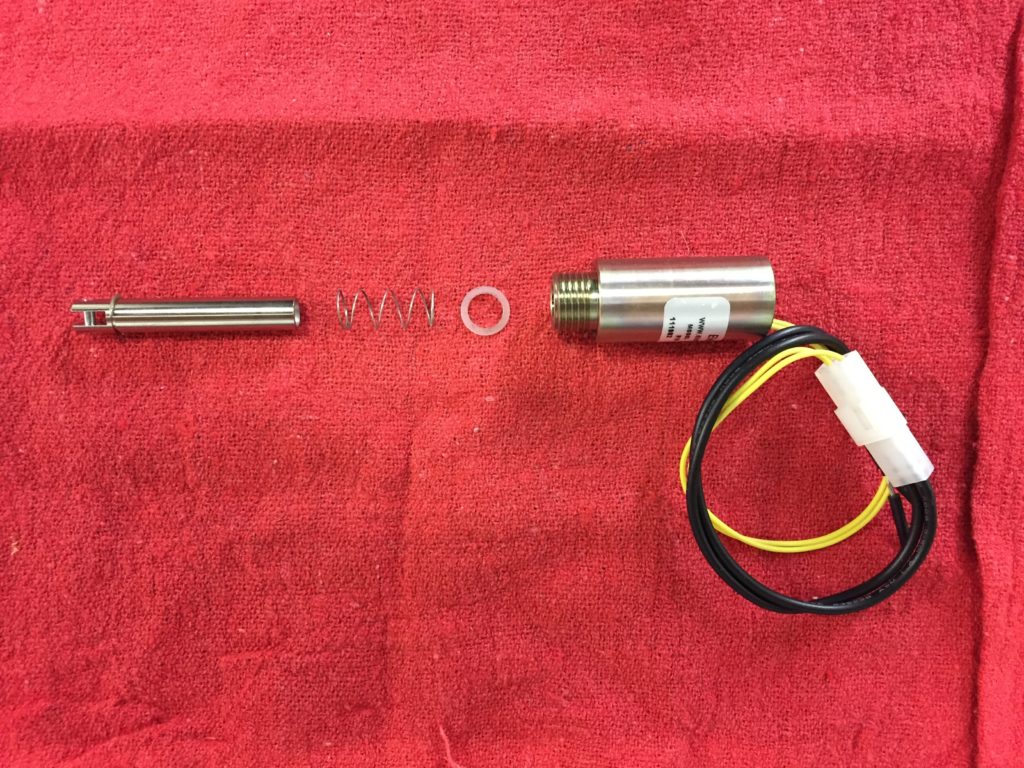 Figure 7 shows its installation on the armature itself prior to installing the rest of the solenoid. 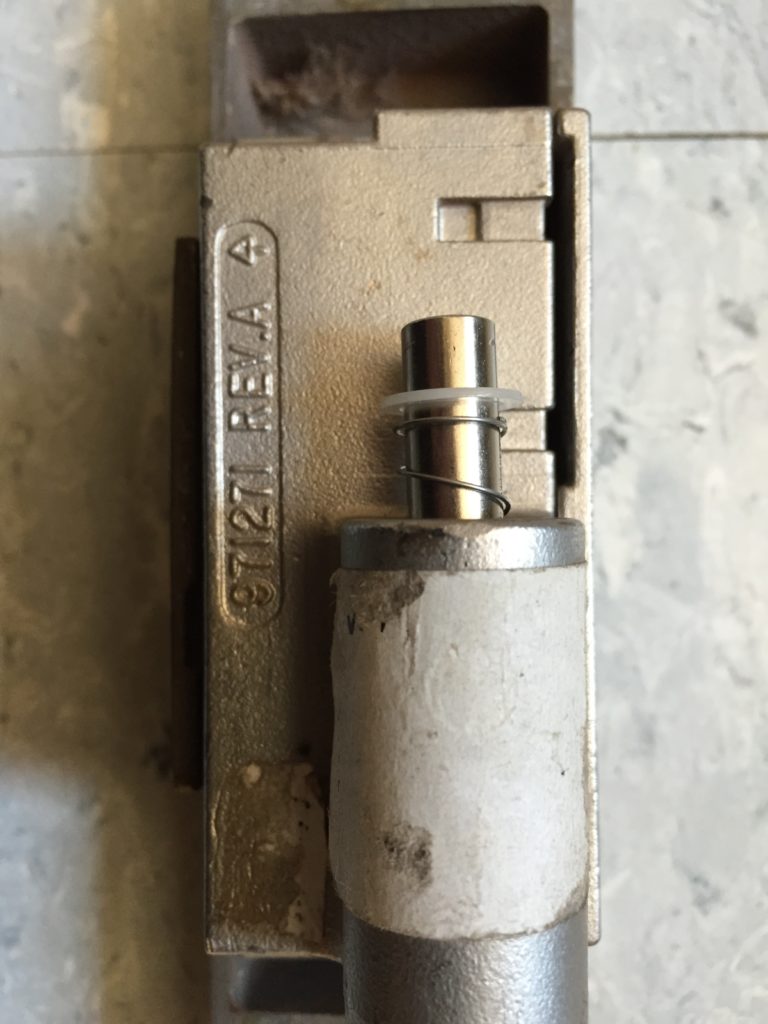 Take note that the spring goes between the washer and the snap ring. With the parts correctly oriented, simply screw the solenoid back onto the electric strike. Reconnect the electric strike to the power source, and test for operation. If all checks out — and it should — you can remount the strike and consider the job done. It’s literally that simple.

Salvaging parts at this point is at your discretion. In my case, the previous washer and spring were coming back to my shop.