Yale began producing their proprietary interchangeable core format, commonly called Yale LFIC, in 1960. They would receive a patent for this core in November of 1961. In the book The Core of the Matter, AJ Hoffman mentions that Yale also offered an Oval-shaped removable core around this time. They eventually settled on offering their current figure-8 shaped core, which is still manufactured today. A high security version, called the Yale Security, was introduced in 1989. 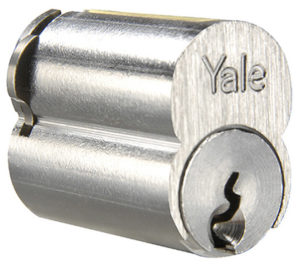 Medeco was allowed to produce a large format core to retrofit into existing Yale LFIC housings while Yale’s patent was still active. Medeco’s core became their 31 Series, which they still produce. Both the Yale LFIC and the Medeco 31 Series, in terms of size, shape, and dimensions, are identical – the only difference is that Medeco’s 31 Series utilizes their angled pin and sidebar designs.

Similar to Schlage’s Full Size Interchangeable Cores, Yale’s LFIC doesn’t use multiple shearlines and relies on a control lug at the rear of the core that is actuated by a control blank. To remove the core, the user:

Yale LFICs are available in 6 and 7-pin formats. 5-pin cores were offered for a time but they have since been discontinued. If a user has a 5-pin system and are trying to incorporate Yale LFICs, they would need to order 6-pin formats and leave the 6th chamber empty.
For 5-pin cores, the control key must be 6 spaces, or pins, long. For 6-pin cores, the number becomes 7. In either case, the depth of the “control cut” is #1, no matter the key bitting specification you are using. A #1 cut at the tip creates a potential problem for existing master key systems that didn’t plan for interchangeable core integration due to MACS, or maximum adjacent cut specification. MACS can prevent a possible control key because the adjacent cut can be so deep that it starts to remove material from the tip of the key. This is relatively rare, but it bares mention.
Yale LFICs can be used with .019” and .025” key bitting specifications. The .025” key bitting specification is no longer used for new factory systems, however.

For decades Yale LFICs didn’t allow for top loading. In order to pin a core, the locksmith had to remove the plug, load the pins, and reassemble. After January 2002, Yale redesigned the cores for top loading via a capping strip. Since this redesign, there should be no need to disassemble the cores for pinning and basic servicing. If disassembly is required, however, care must exercised when removing the plug without a key due to it’s groove; the top pins could potentially enter this groove, locking up the core. This can be prevented with a shim during the disassembly and reassembly process.

Special attention should be paid to the screw holding the control lug. It can be over-tightened and, if so, bind against the control lug, potentially damaging the control pin and/or control key. This screw should be tightened snug but no more.
For more information, download Yale’s Cylinders and Keying Manual.