This week we’re featuring a guest column by Wayne Winton of WaynesLockShop.com. If you would like to submit a guest column, contact us.

What the heck are RFID or EAS systems? The details are readily available via Wikipedia or other sources, but in a nutshell, they’re the things that beep if you exit a store and the tag hasn’t been deactivated during checkout. We’ve all heard them before, but not many of us know how they work or how to install them, even though they’re a huge part of the security industry. Stores are literally spending billions on theft prevention, and they’re not spending the bulk of that money on locks; it’s on these systems to catch criminals in the act. We all know that investing in layers of security is important, and this is one of those layers.
I received a call to see if I would be willing to bid on installing one of these systems in a very high-end clothing store. I was in the middle of replying “no,” but I caught myself mid sentence. I had a flash thought and quick conversation with myself. “Hmm… maybe this could be a new source of income and a new skill for me to learn. How hard could it be?”
So I started asking questions about what was involved and the total process. Turns out, it didn’t sound that bad, with the exception of making a slot 56″ x 9″ x 56″ x 9″ rectangle in solid concrete 1″ wide x 1½” deep. Oh yes, and don’t make any dust whatsoever!
So, my brain computes the numbers and the solution, and I responded to the caller. “OK, I’ll do it. Here’s my price.” I bid high enough that I wanted to scare them away, but to my surprise, they gladly agreed. It started to sink in that I was now committed to doing this!
I did the proper research on cutting concrete and how to keep dust down and added a bit of my own thoughts into the mix and came up with a plan. I always look at every job that seems difficult and tell myself, “There is some man or woman doing the same thing somewhere right now, so it can be done. I just need to learn how.” The following description and photos will explain exactly how I did just that.

Upon arriving to the job site, I surveyed the area and double and triple-check my installation measurements. Then, only when I was 100% positive of the location, I began measuring my cut out (see Figures 1-3). I used a large 4′ x 2′ square to make sure everything was centered and a perfect square. I crosshatched out the area to be cut to avoid confusion from all the lines laid out. Having a good plan and staying committed to it is the key to a good job. I had never cut concrete in my life, so it was important to stay on track and organized. 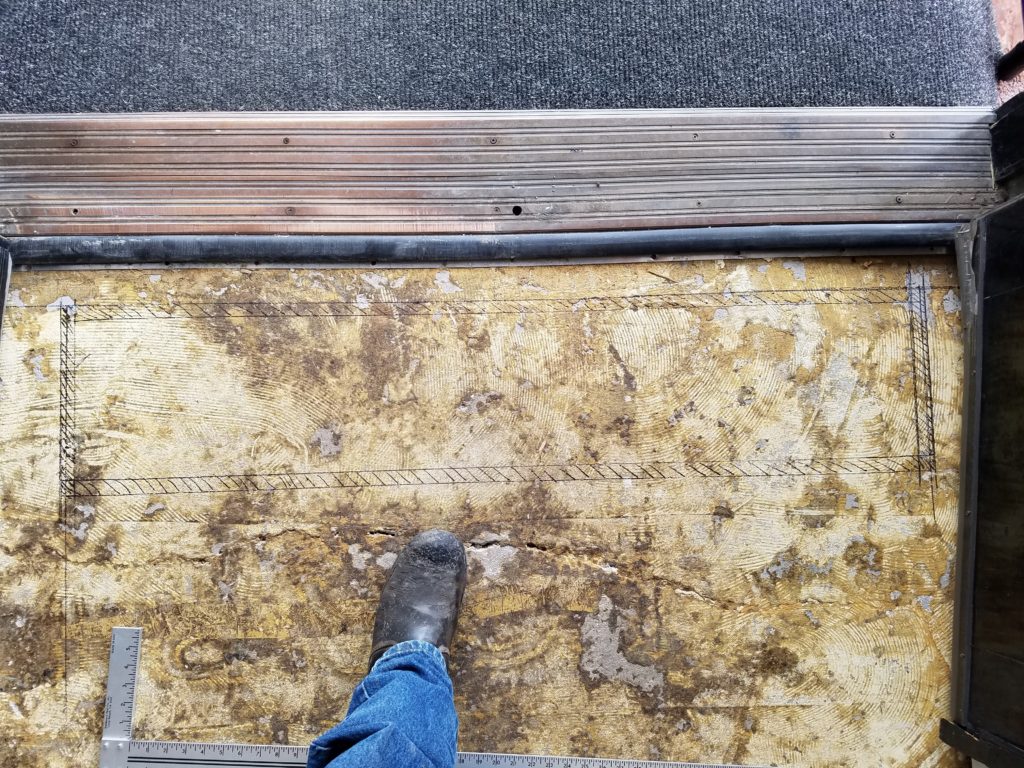 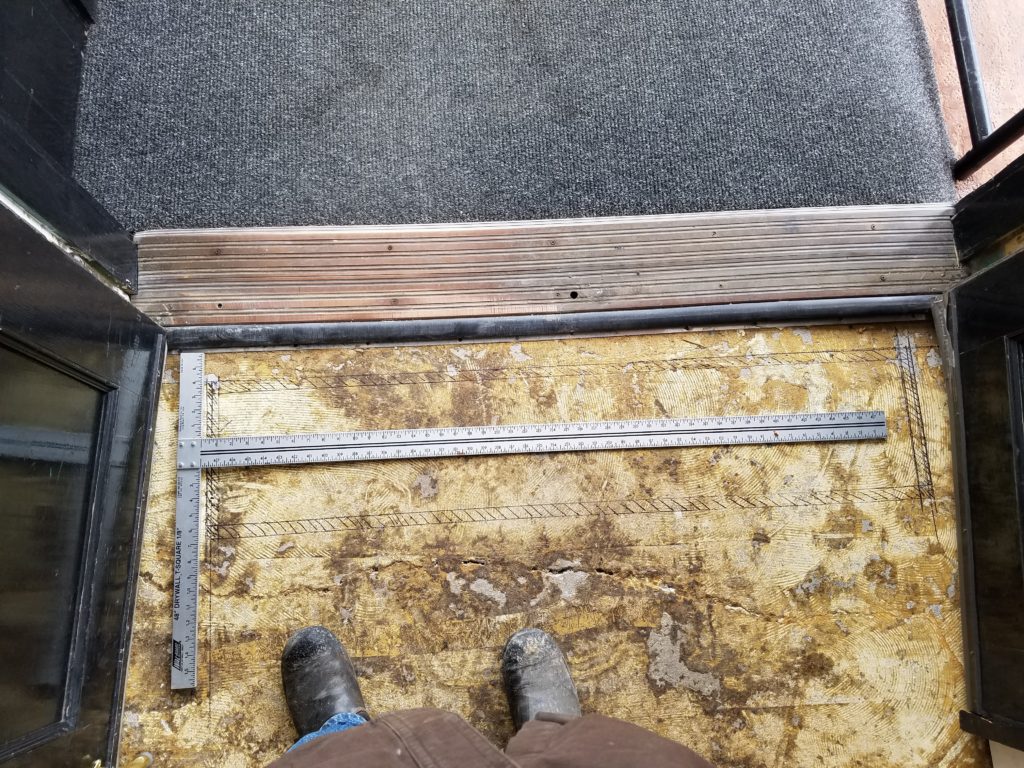 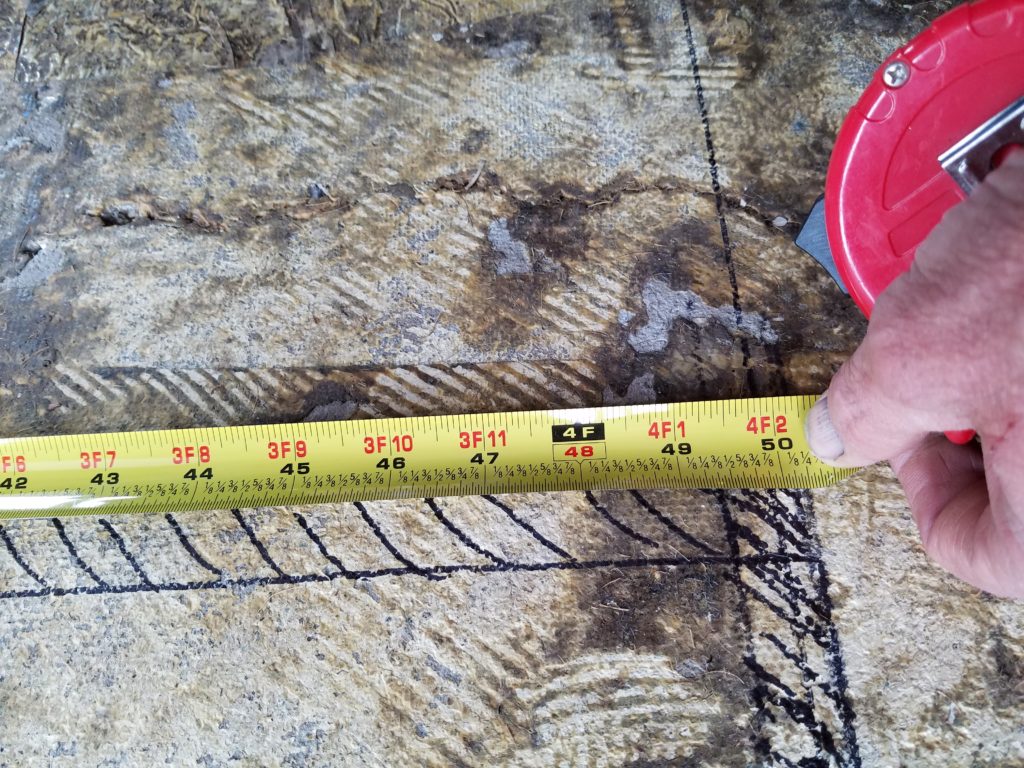 I decided to use a cordless 18V Milwaukee 7½” saw equipped with a diamond blade to make my cuts. I’m highly invested in the system, and I had plenty of batteries to keep it turning. I did bring a corded unit just in case, along with a backup blade. So, rigged up and ready to go, I set the cut depth to 1½” (Figure 4) — and I had a secret weapon. 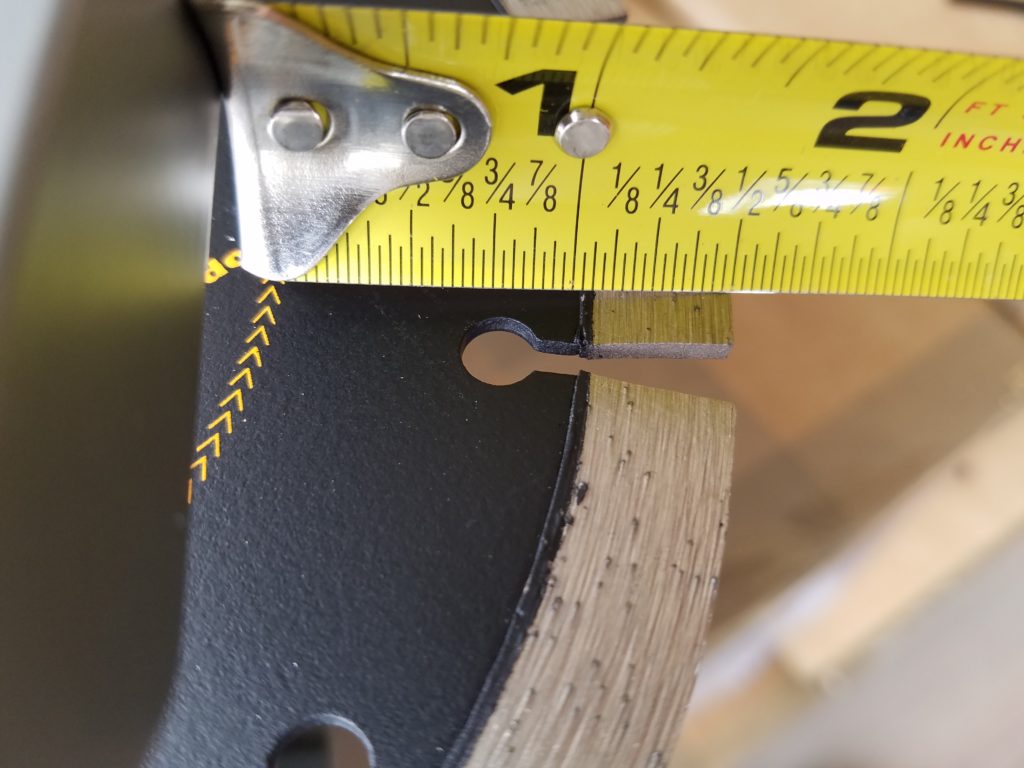 This is the part where I added my own thoughts into the equation. I sealed a shop vac attachment to the largest part of the saw and sealed the rest of the openings up with Gorilla tape to make a tight suction (Figures 5-9). 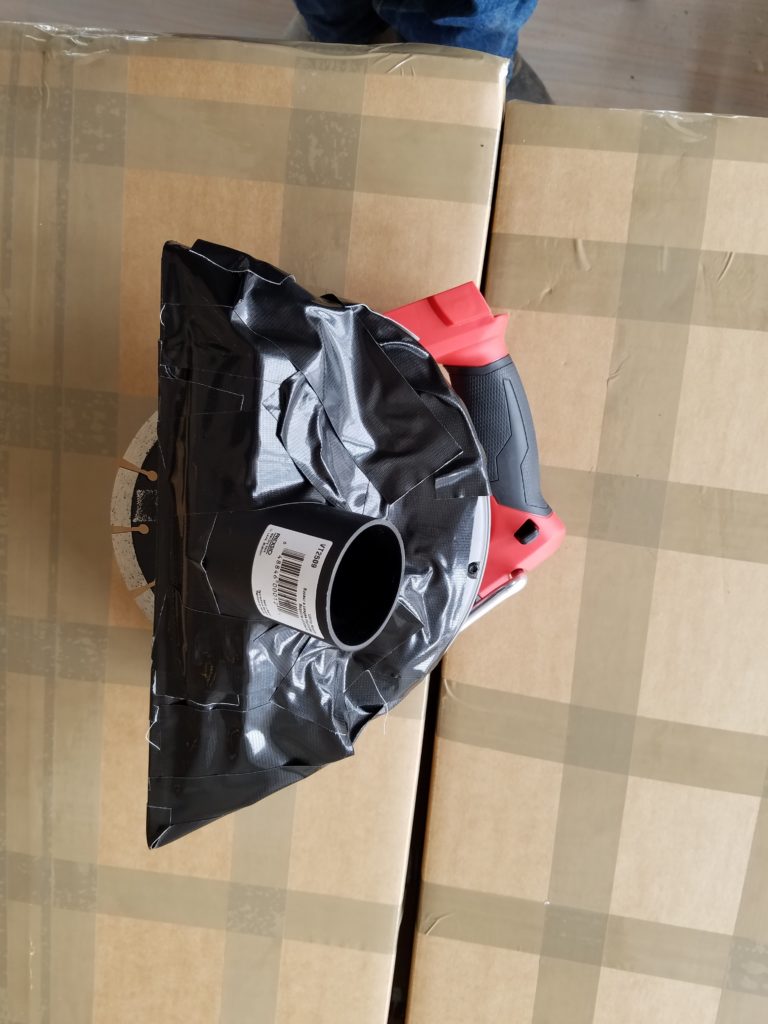 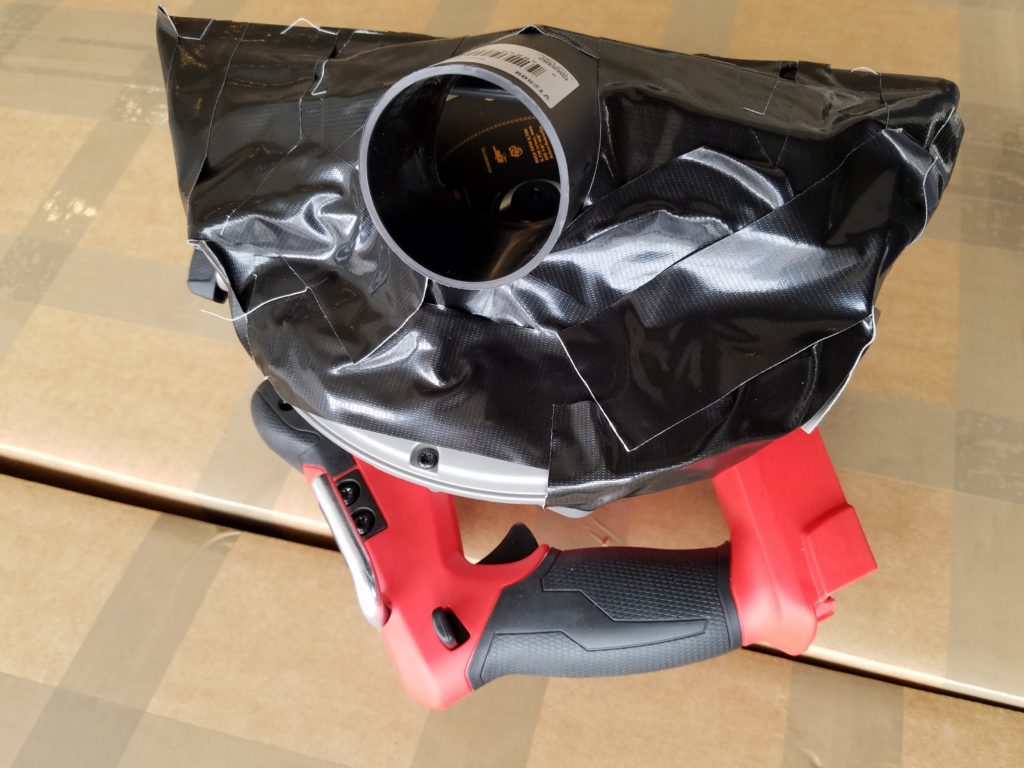 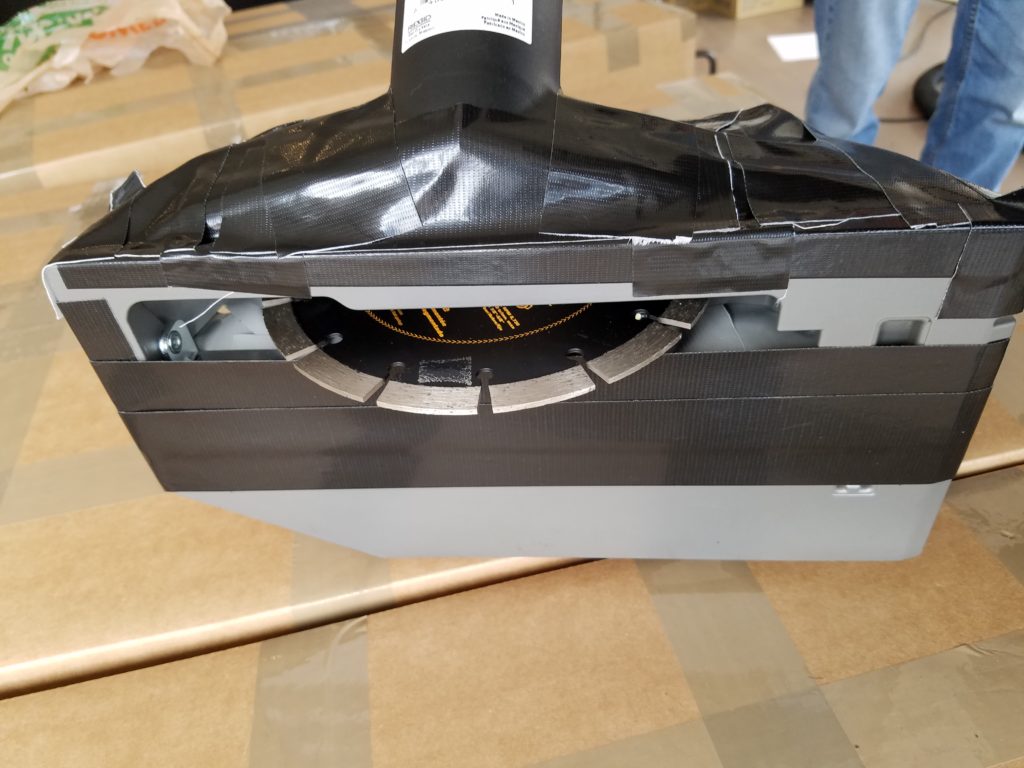 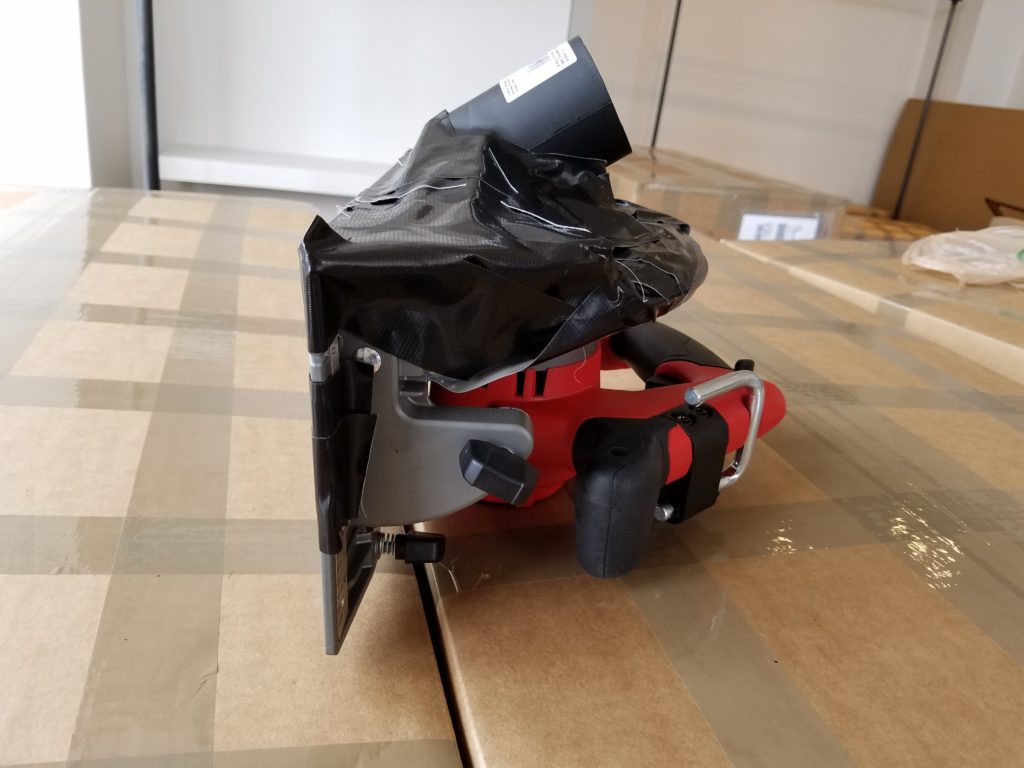 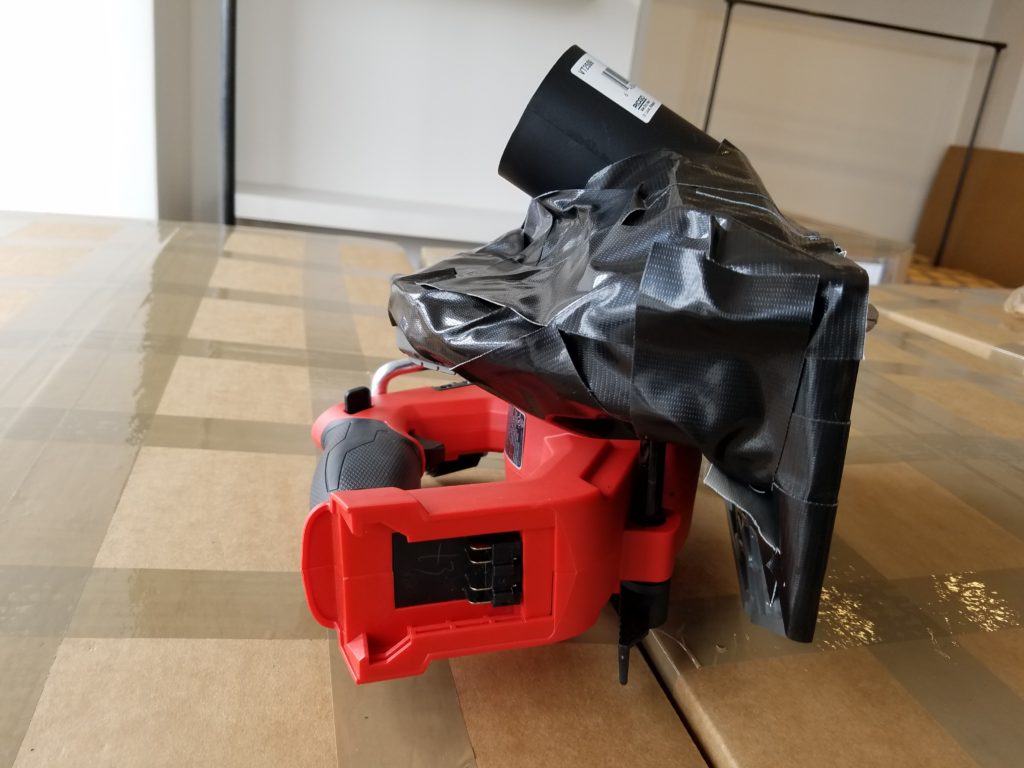 This ensured every bit of dust got sucked into the shop vac and didn’t land in the store or on the high-end clothes. This was the one bit of information I couldn’t find online: how to keep the dust contained without using water. Water wasn’t an option in this location at all, so this was my solution to the problem. You never know if a new untested idea will work until you hit the power button and see your plan in action. It worked flawlessly! Truly not one speck of dust could escape. It’s one of the ideas that came together in the field perfectly (that doesn’t happen that often). I could hear the shop vac struggling about halfway through, so we took a break, emptied it out and cleaned the filter outside. We examined how the cutting was going (Figures 10-11). 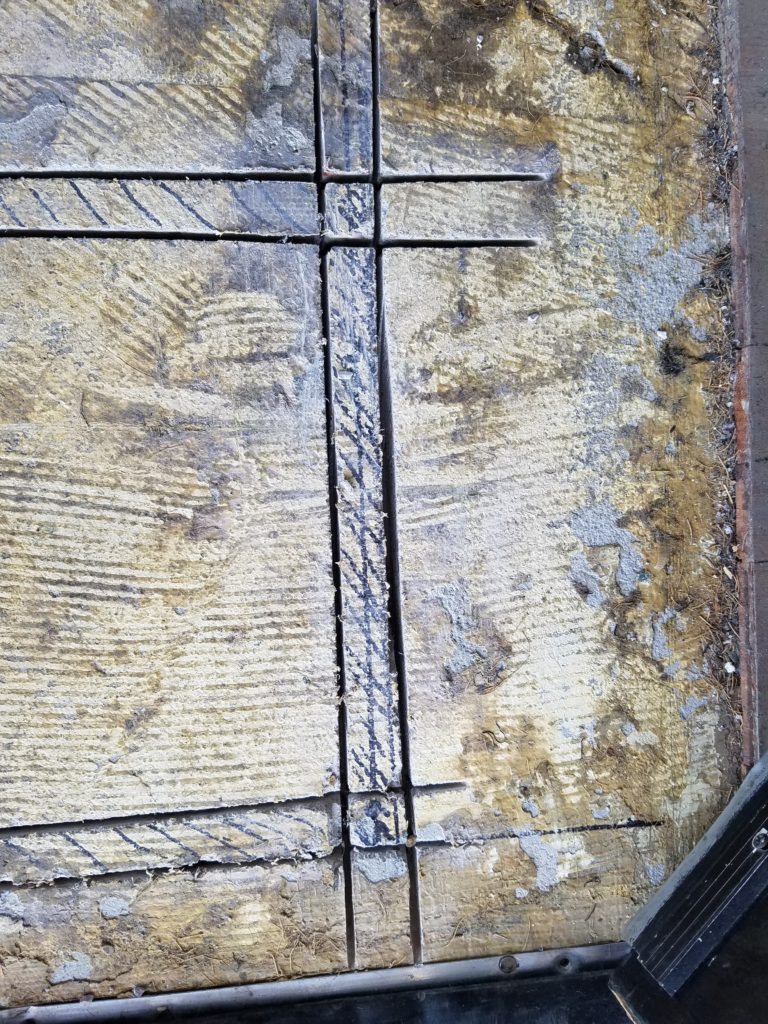 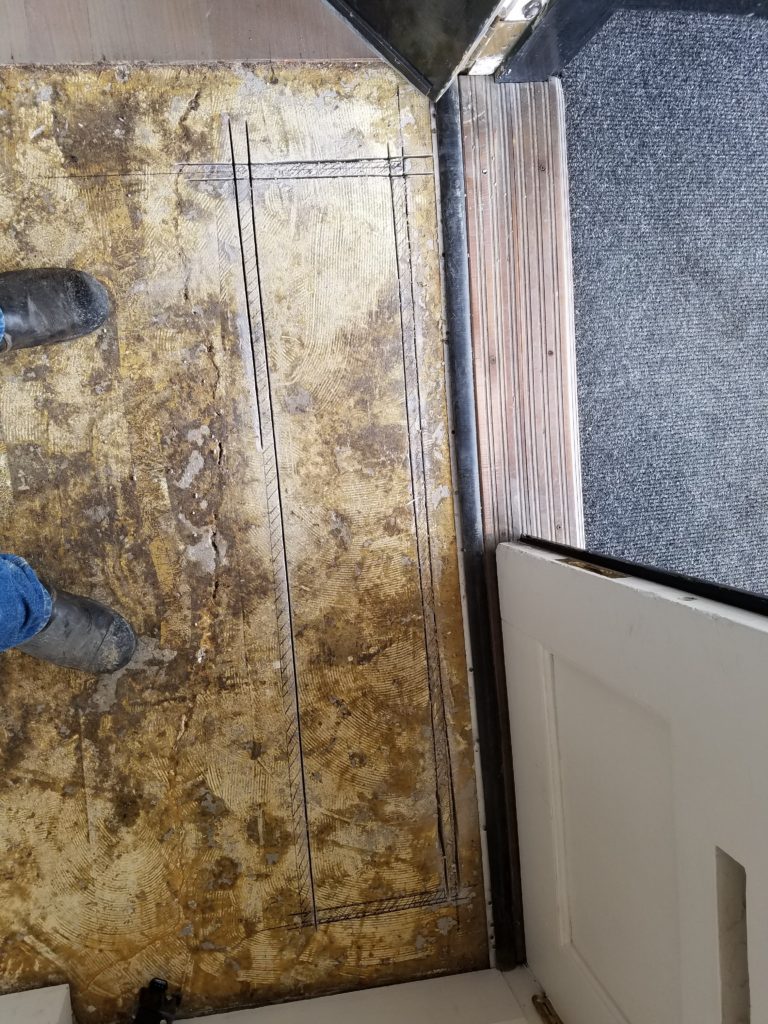 After adjusting to cut the lines out as measured and being sure I cut well past the corners to ensure proper depth, it was time to bring out the air compressor. Again, we were faced with the dreaded dust issue.
Using an air chisel (Figure 12) with the shop vac hovering over every move, it was time to clean the slot out. 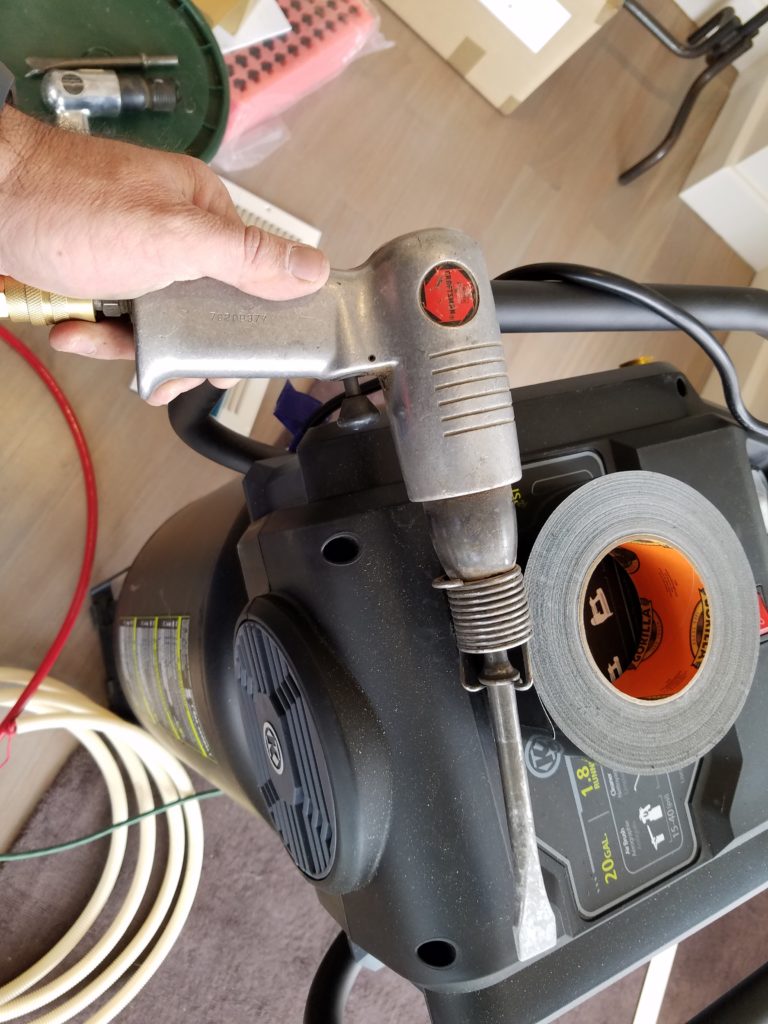 This was to ensure it was the proper depth to fit the wire and plastic conduit while having room to seal it back up in concrete (Figure 13-14). After the slot was cleaned out and dust-free, it was time to see if the loop fit. The system is basically a dual copper wire in plastic conduit in a premeasured circle or rectangle, leaving enough wire to run to a computer system that reads the signal when the tag comes within a certain radius. 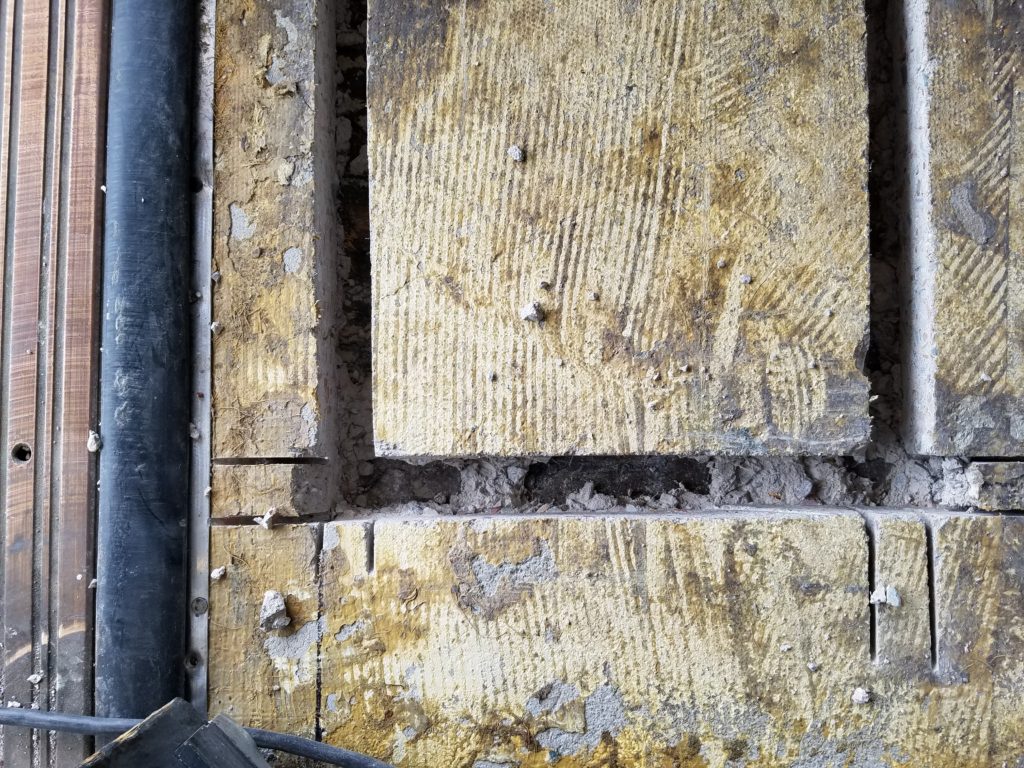 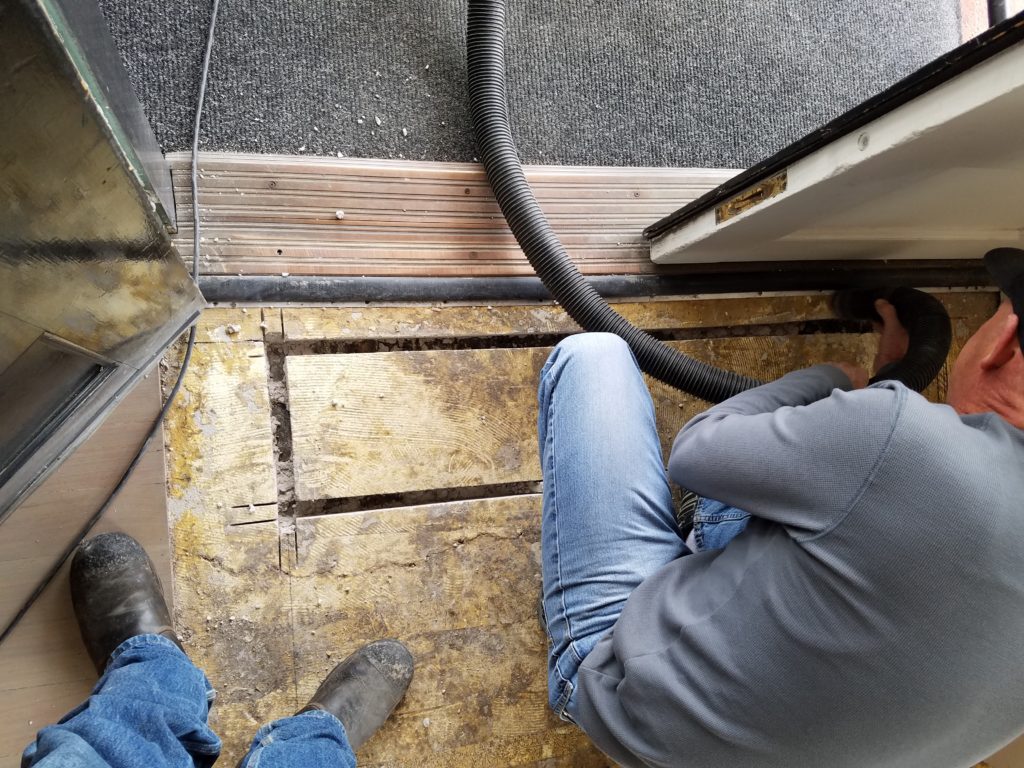 I crossed my fingers and really hoped my planning paid off. Success! It fit like a glove, and no further modification was needed (Figure 15). 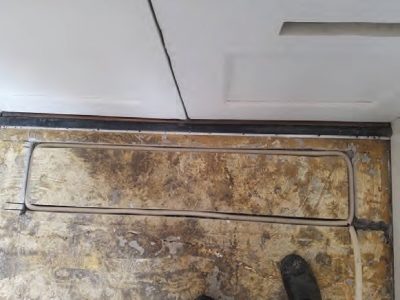 The wires run over to the wall, where white conduit covers it along the baseboard to the receiver (disguised in a heater vent) and then back out to a power source converting the system to low-voltage 12V power. This allowed me to be able to work on it in the first place (Figure 16). 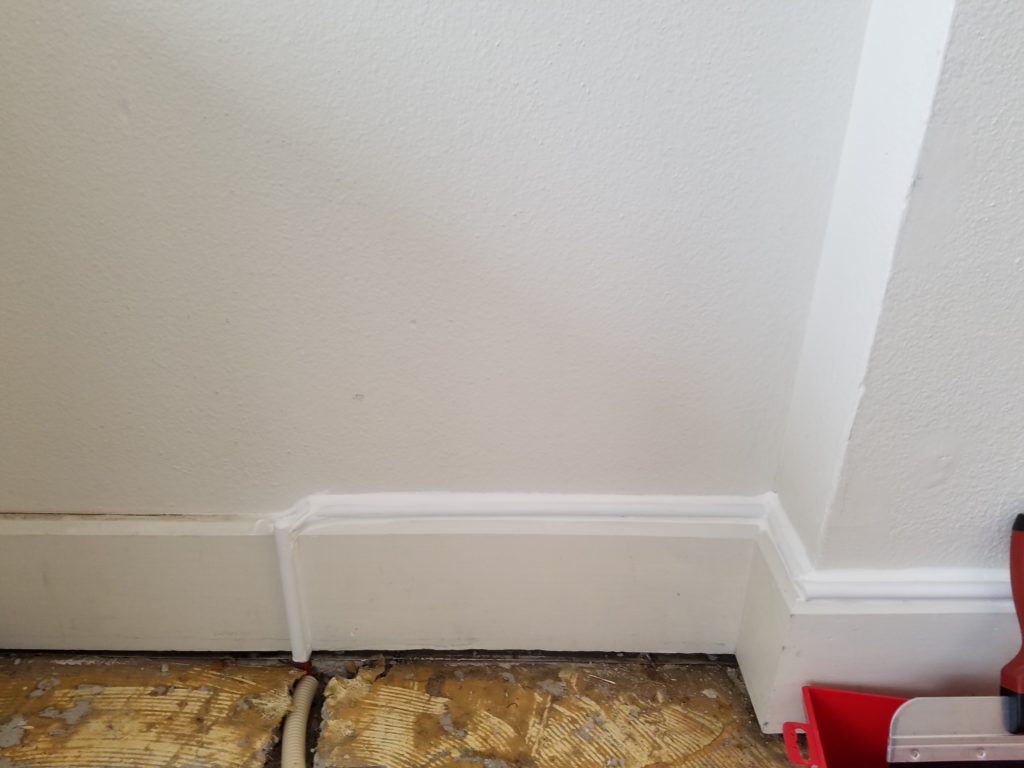 I then needed to cut a hole in the wall to hide the receiver and place the heater vent over it to hide it. A spot was measured out and cut (Figure 17), but a false wall was discovered; mounting had to be reevaluated. 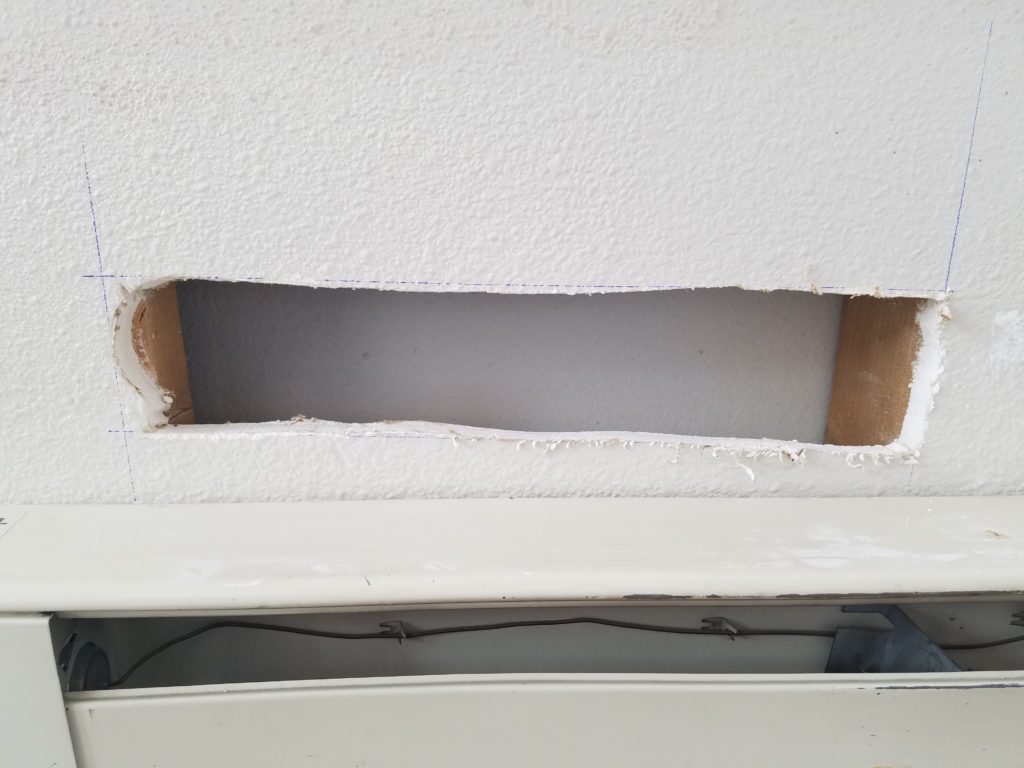 We cut a larger hole, and the system was mounted vertically. (Figure 18). 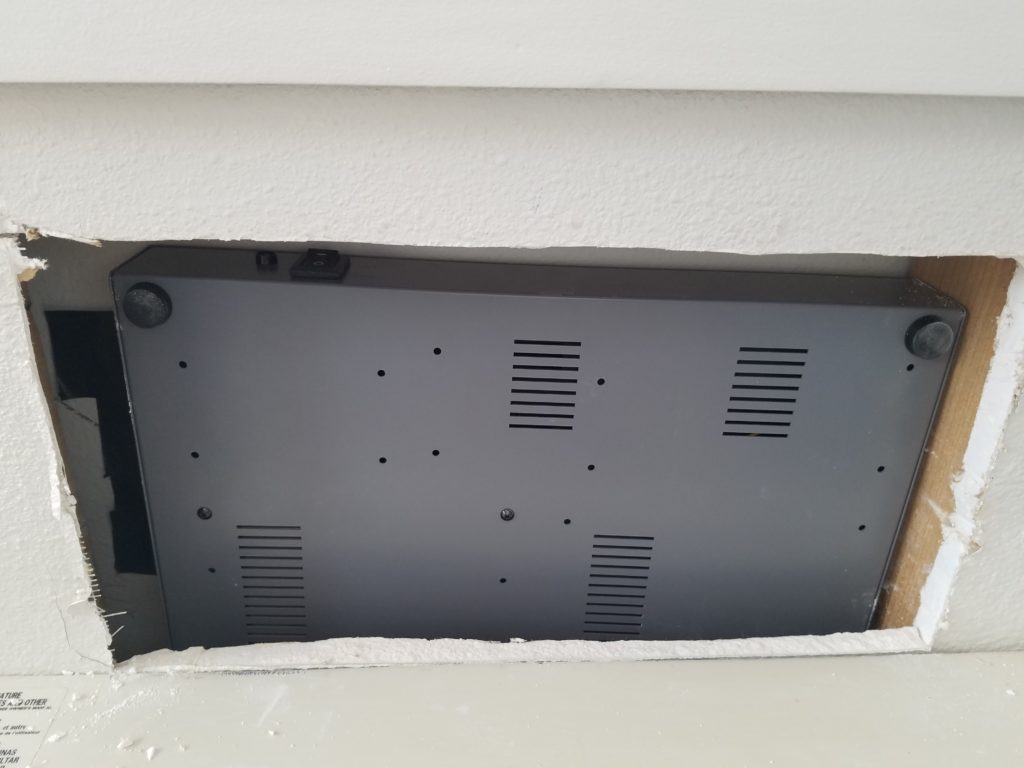 Then, the heater vent was placed to see if it would conceal the unit (Figure 19). 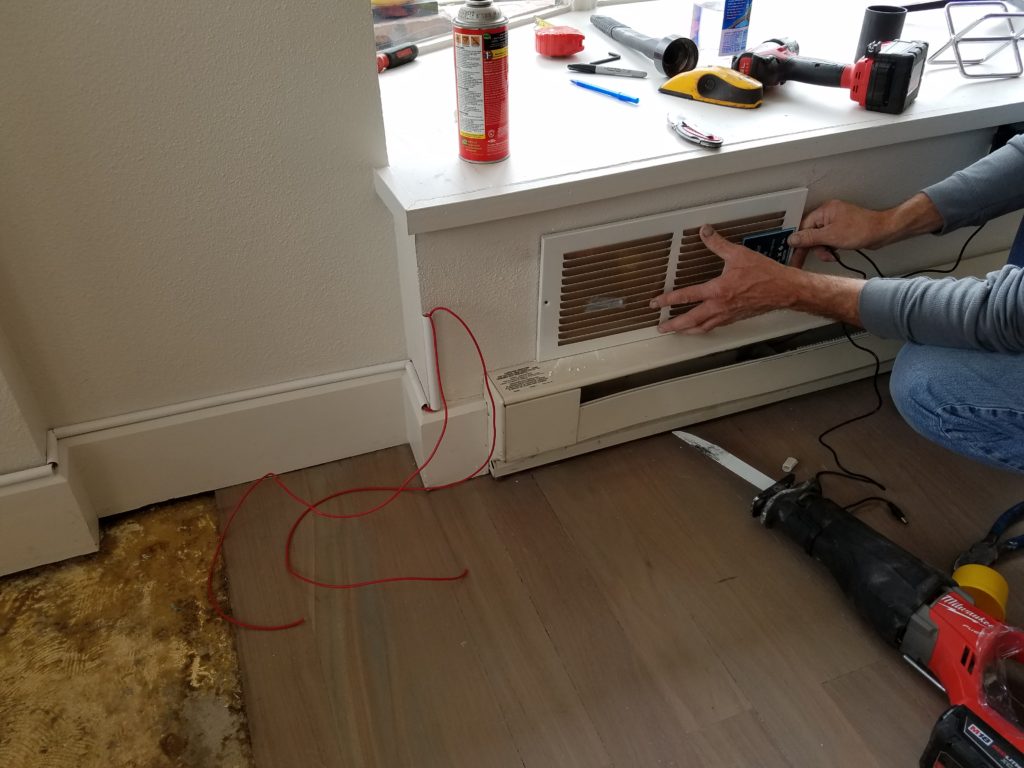 Then came the really scary part: checking to see if the system worked and setting the sensitivity. For this, the receiver housing must be opened and the wires attached (Figure 20). 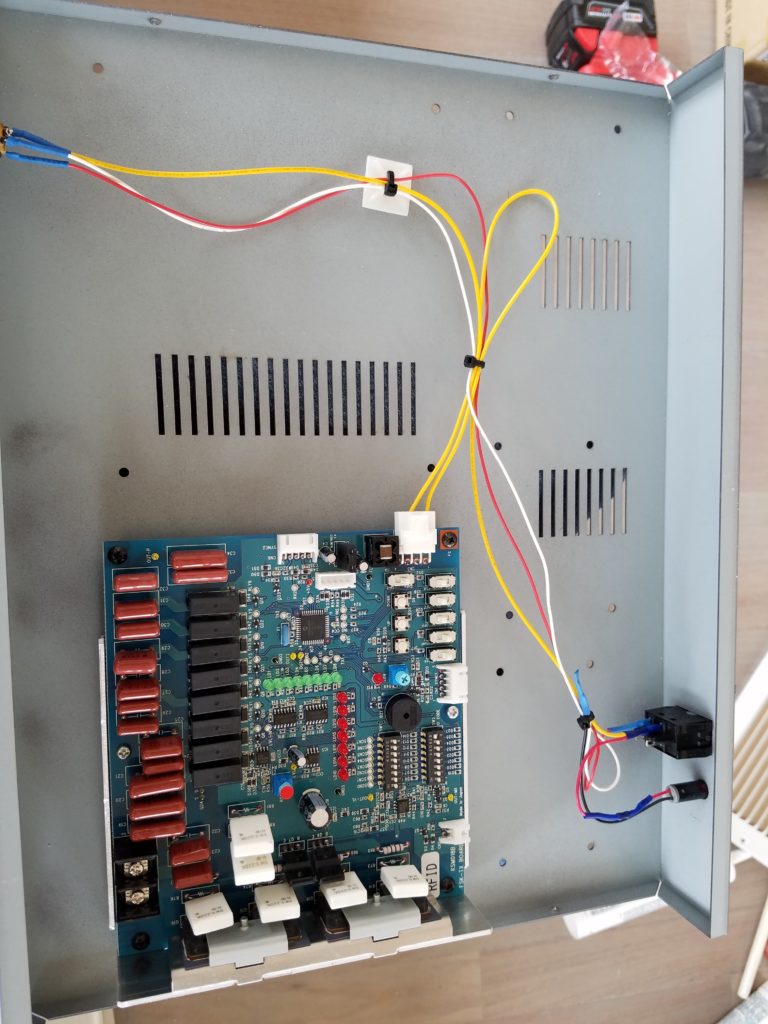 The knob in the unit adjusts the sensitivity and how far the tag needs to be from the wires in the ground to set off the alarm (Figure 21). Now I’m no tech guru, so tech support for the unit was able to walk me through the process. It was pretty simple, really. 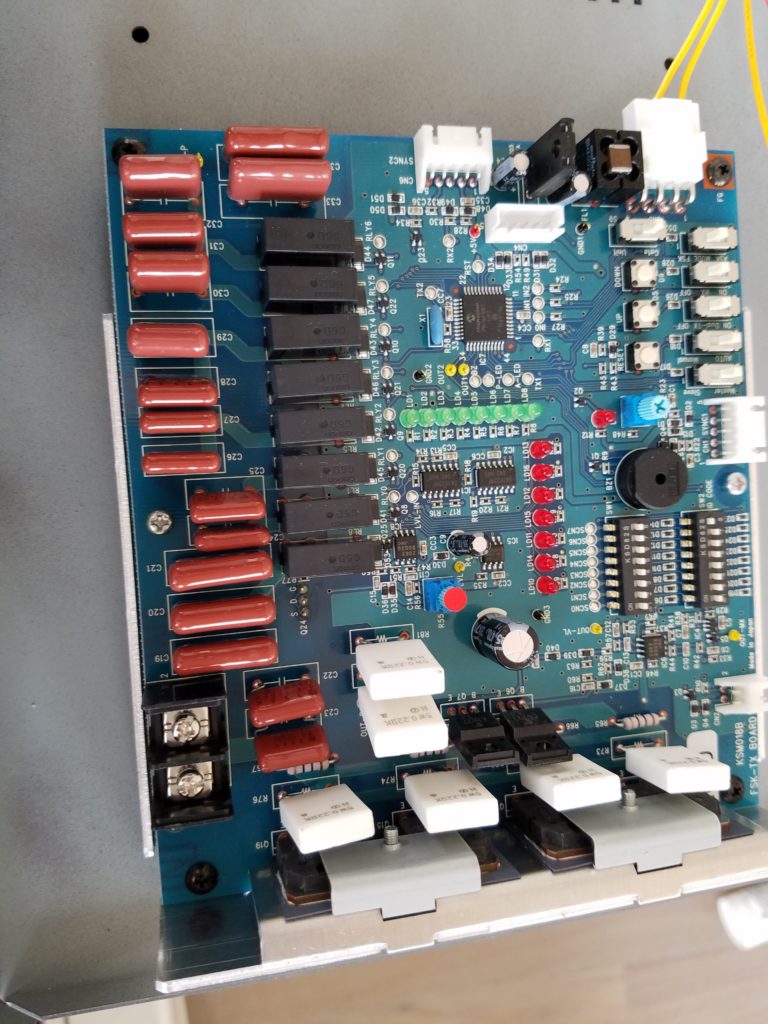 The deactivating pad was installed under the desk (Figure 22), along with the alarm pad (Figure 23). Again, wires were run and disguised under a power strip threshold to provide power to these units — also quite simple. The system was tested repeatedly and screwed down into place. 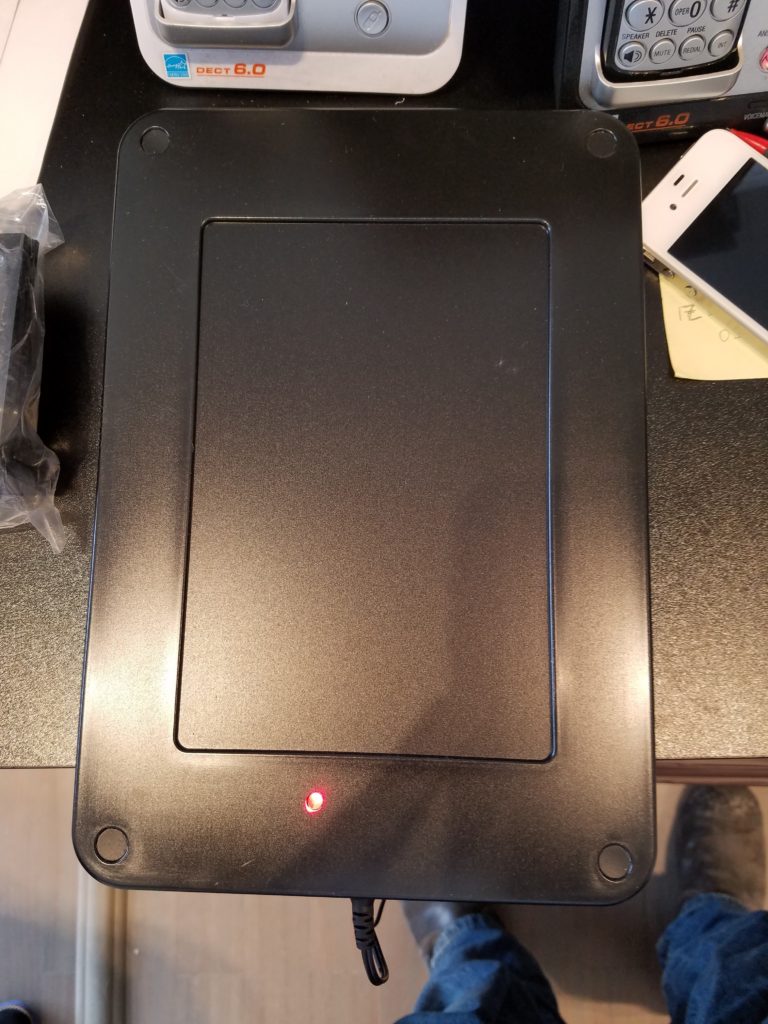 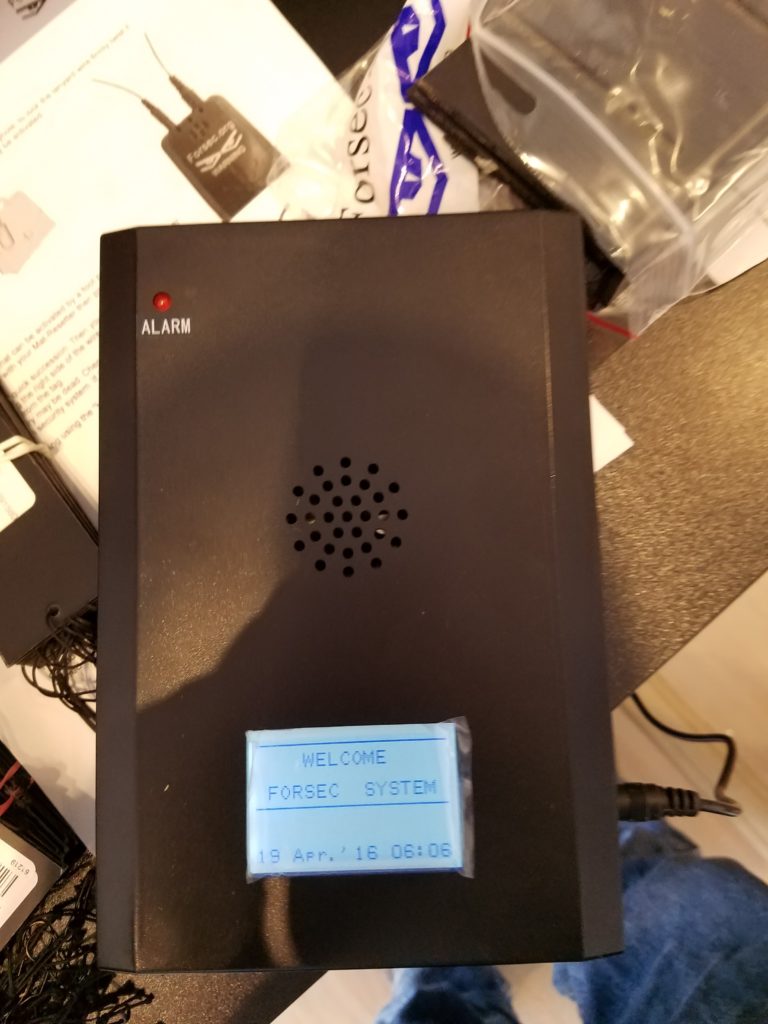 After noting the entire system was working properly, it was time to seal it all up and make my mess look pretty. I mixed up some Portland cement (no rocks) to fill in the groove (Figure 24) and then troweled the mixture to a smooth finish (Figure 25). 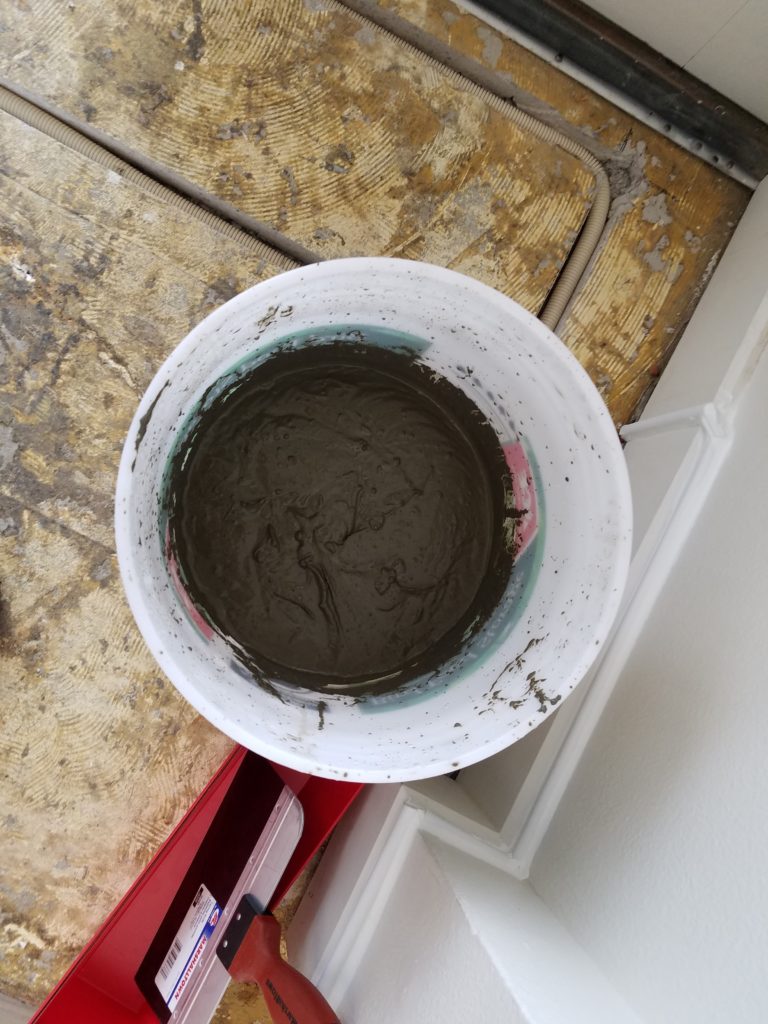 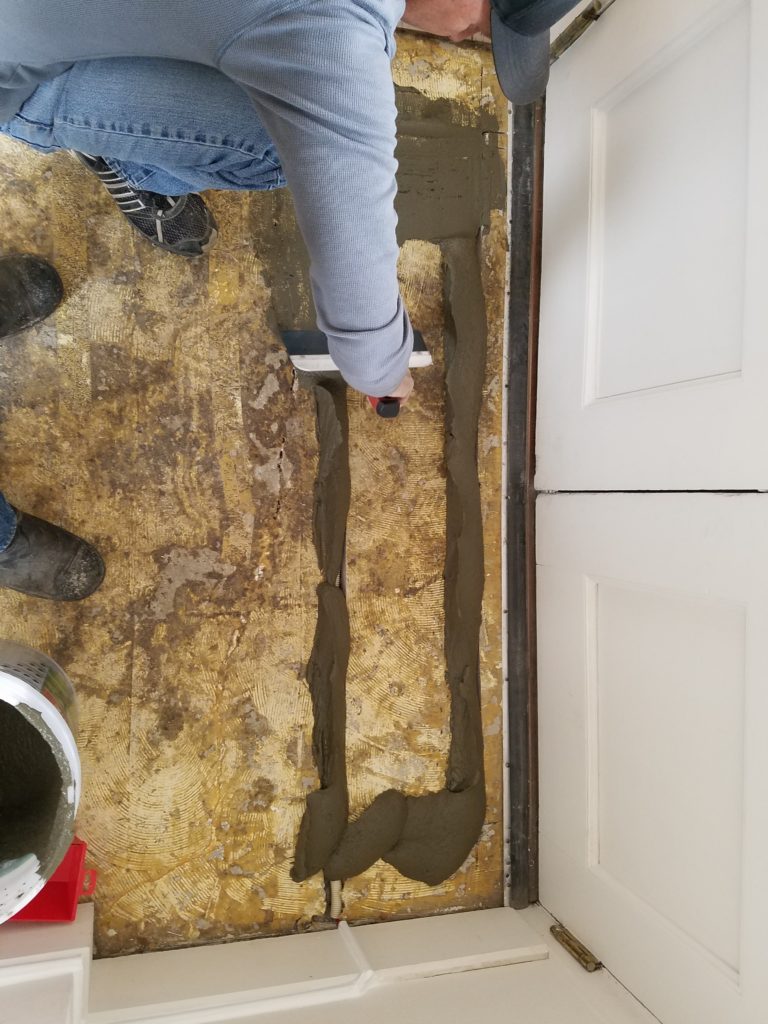 This made it look as if we were never there once the carpet was placed over it. Then, we caulked in all the conduit and made it seamless from the floor to the power source; we made it very professional looking (Figure 26-27). 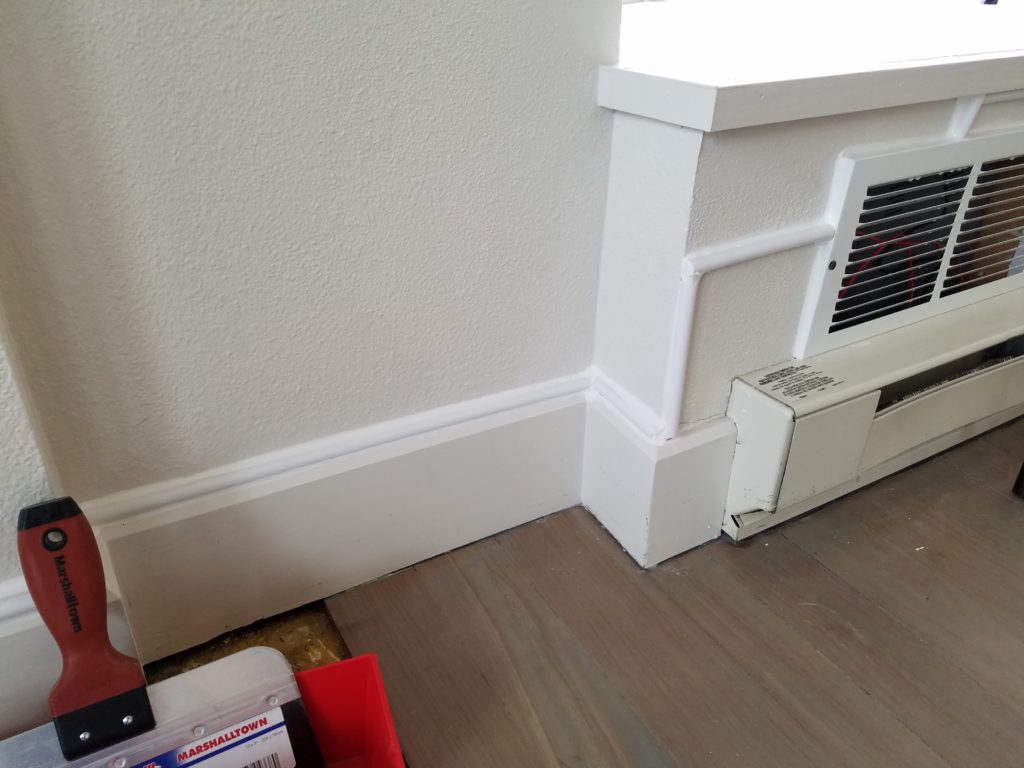 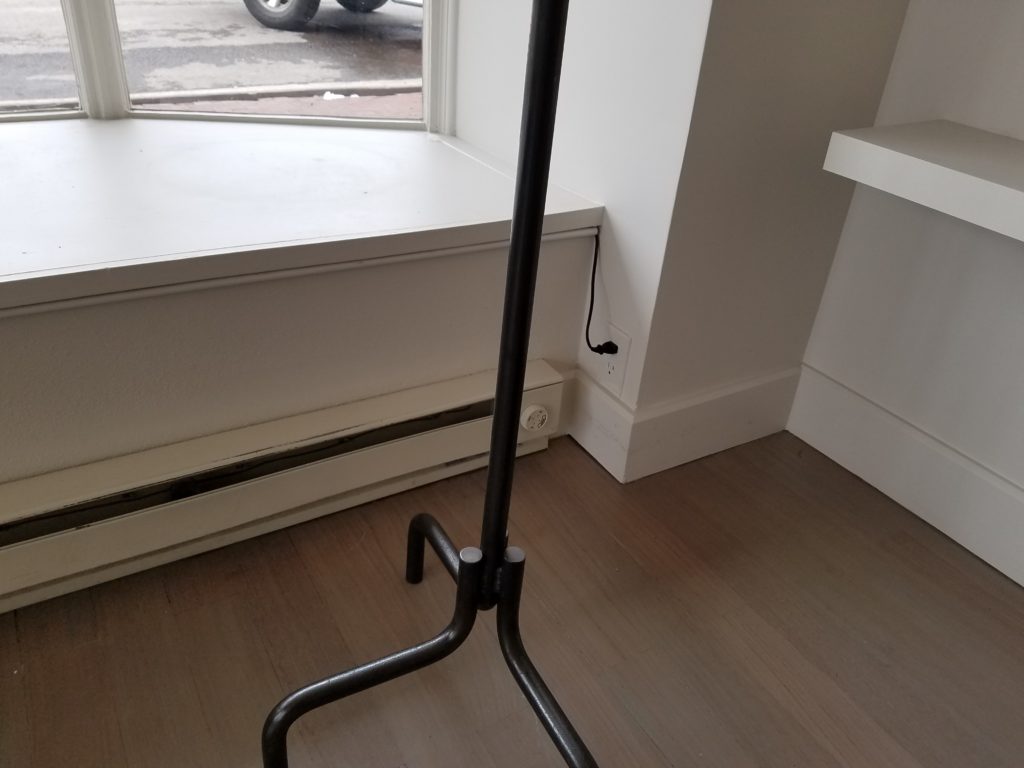 Finally, we replaced the carpet and threshold to make it look like we were never even there (Figure 28). 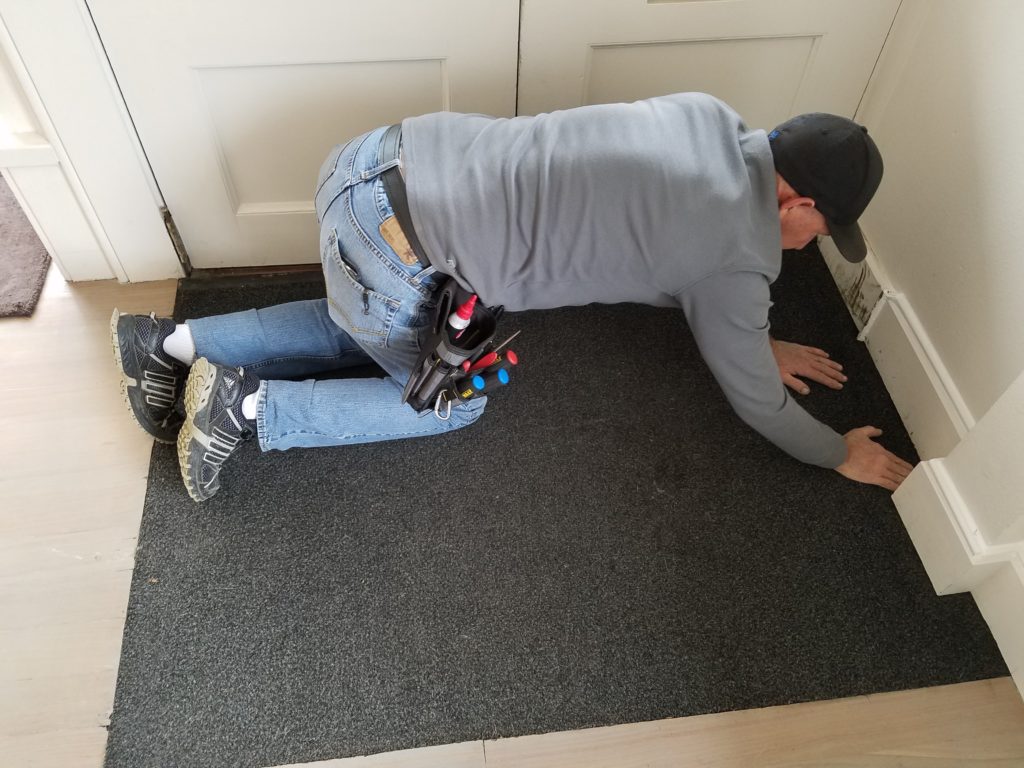 We received approval from the manager of the store and the company who hired me to do the job, and there was nothing more to do but clean up and pack up tools. This job sounds ultra-complicated, but when broken down into individual tasks, it suddenly becomes much more manageable and simple. Really, the most difficult part of the job was keeping it clean. No one part was actually that difficult or intense.
So, the next time you get a call to try something outside your comfort zone, break it down into pieces and individual tasks, and give it a go. You might be surprised at what you can do — and the price you can charge — when you think outside the box.
By Wayne Winton|2018-11-01T09:00:31+00:00November 1st, 2018|Access Control, All|1 Comment

About the Author: Wayne Winton