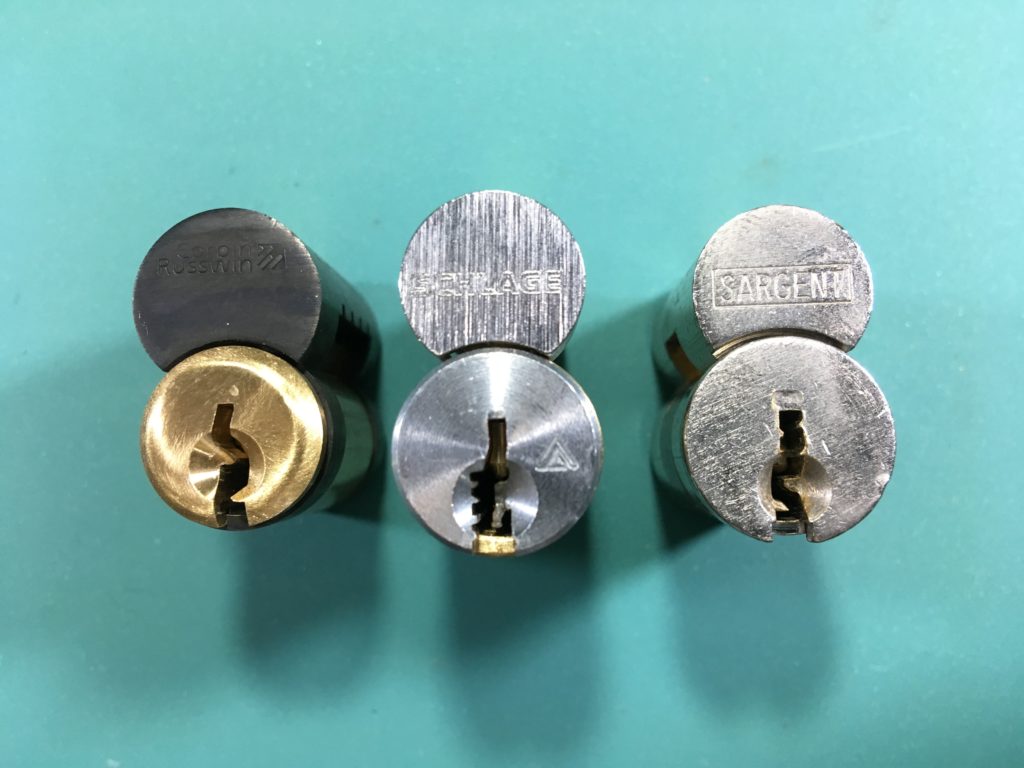 core n. a complete unit, often with a “figure eight” shape, which usually consists of the plug, shell, tumblers, springs, plug retainer and spring cover(s). It is primarily used in removable and interchangeable core cylinders and locks.


Cores are very much like cylinders in that they are both complete operating units, containing a plug, shell, tumblers, springs, a plug retainer, and spring covers. Unlike cylinders, however, cores generally do not have a cam or tailpiece directly attached to them, although there are rare exceptions. Also unlike cylinders, cores are inserted either directly inserted into the lock, such as in the handle of a leverset, or into housings rather than screwed in or via use of a spring loaded, retaining pin.
housing n. that part of a locking device which is designed to hold a core

Housings are frequently described as either rim or mortise. Rim housings utilize tailpieces and interface with surface mounted hardware. Mortise housings utilize cams and interface with mortise locks.
The primary benefit of cores, as opposed to cylinders, is that they allow the user to remove the core from the lock or it’s housing by using a control key.
control key n. 1. a key whose only purpose is to remove and/or install an interchangeable or removable core 2. a bypass key used to operate and/or reset some combination type locks 3. a key which allows disassembly of some removable cylinder locks
A control key works by retracting the control lug, which then allows the core to be removed from either the lock or it’s housing.
control lug n. that part of an interchangeable or removable core-retaining device which locks the core into its housing

Control lugs are generally found above the core’s plug although different designs can place them elsewhere. A manufacturer’s design ultimately dictates the position and function of the control lug. Control keys either directly manipulate the control lug, such as lifting a special pin to engage it, or form a separate shearline to retract the control lug.


Perhaps the best examples of removable cores are the Sargent’s “Old Style” cores as well as their Keso/Keso F1 cores.
interchangeable core n. a key removable core which can be used in all or most of the core manufacturer’s product line. No tools (other than the control key) are required for removal of the core.