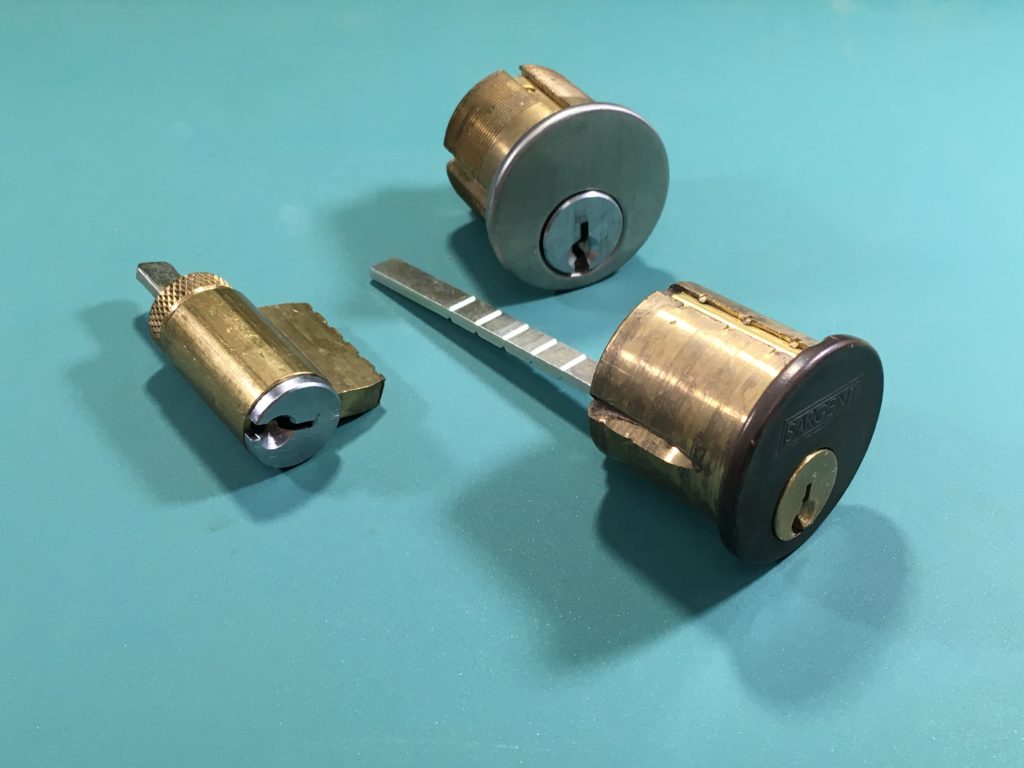 As I mentioned in last weeks Tyler’s Take, learning and utilizing proper locksmith terminology is very beneficial to locksmiths. This week we’re going to start our series of articles defining and illustrating locksmith terminology, in accordance with the LIST Council’s Professional LOCKSMITH Dictionary, with arguably one of the most popular items a locksmith will encounter: pin tumbler cylinders.
cylinder n. a complete operating unit which usually consists of the plug shell, tumblers, springs, plug retainer, a cam/tailpiece or other actuating device, and all other necessary operating parts

Pin tumbler cylinders come in multiple types. The most popular of these types are key-in-knob/key-in-lever, mortise, and rim.
key-in-knob cylinder n. a cylinder used in a key-in-knob lockset

On KIL cylinders, the tailpiece is generally positioned at 6 and 12 o’clock.

The difference between the two, and standard mortise locks for that matter, is the diameter of the cylinder itself. Mogul cylinders have a 2″ diameter. As the Mogul definition states, Mogul cylinders are frequently used in prison and detention locks. Detention locks are very heavy duty and sized to match large cell doors, which largely explains their cylinder size. Peanut cylinders have a 3/4″ diameter and are typically used in special applications, such as mailbox locks. They aren’t as popular as they once were so you don’t see them much these days.
rim cylinder n. a cylinder typically used with surface applied locks and attached with a back plate and machine screws. It has a tailpiece to actuate the lock mechanism


Rim cylinders are typically used for rim mounted exit hardware, such as a panic devices. They are different from mortise cylinders for a few distinct reasons. First, they utilize a tailpiece to actuate the lock mechanism and not a cam. Second, they usually don’t contain threads (although some manufacturers are now threading them – presumably for production cost purposes). Third, they are secured into a door or lock mechanism through a back plate and two machine screws.


Within the shell is the plug.
plug n. the part of a cylinder which contains the keyway, with tumbler chambers usually corresponding to those in the cylinder shell

The plug of the cylinder is where the key is inserted; it contains the keyway, which determines what blanks are allowed to enter the plug. Plugs come in a variety of sizes (both length and diameter), finishes, and keyways to accommodate a wide range of needs. Despite these varieties, the function of the plug remains the same.
keyway n. 2. the exact cross sectional configuration of a keyway as viewed from the front. It is not necessarily the same as the key section.

Keyways are accomplished via wards within the plug.
ward n. a usually stationary obstruction in a lock or cylinder which prevents the entry and/or operation of an incorrect key
Distinct shapes and positions of wards within the plug create the keyway itself. There are hundreds, if not thousands, of keyways in existence.
Moving backwards a bit, portions of the plug/cylinder shell can also be defined:
bible n. that portion of the cylinder shell which normally houses the pin chambers, especially those of a key-in-knob cylinder or certain rim cylinders

Bibles are generally considered to be the portion of a cylinder that is on top of the plug itself. As the definition states, this is the area which houses the pin chambers. The bible can be clearly seen on key-in-knob (KIK) and key-in-lever (KIL) cylinders but they also technically exist in mortise and rim cylinder types (more on those shortly).
chamber n. any cavity in a cylinder plug and/or shell which houses the tumblers


The chambers house the pin tumblers, and by extension the springs. In America, cylinders usually contain 5 or 6 chambers which correspond with 5 or 6 pin key blanks, respectively. Each chamber contains a pin tumblers (typically a bottom and top pin, although sometimes master pins) and a spring.
pin tumbler n. usually a cylindrical shaped tumbler. Three types are normally used: bottom pin, master pin and top pin.

While pin tumblers are often considered to only include bottom pins, they actually include master and top pins.

Cylinders must employ parts to secure the plug within the shell so that the plug does not come out when the key rotates it.  These parts are known as retainers.
retainer n. a component which is clipped, staked, or driven in place to maintain the working relationship of other components
The cylinder’s design and type ultimately determines the type of retainer used.
cap 2. n. a part which may serve as a plug retainer and/or a holder for the tailpiece


Caps, as they relate to pin tumbler cylinders, generally screw on to either KIK/KIL and rim cylinders. They thread into the back of the plug and are held in place by a retainer pin.
retainer pin n. 1. a component seated on a spring, in the end of a plug, that interacts with a retainer cap to keep it in place. 2. Any non-threaded rod that maintains the relationship of two or more different parts.

Cylinder clips, like caps, prevent the plug from being removed from the rest of the cylinder during normal operation. Unlike caps, however, cylinder clips snap into place rather than being screwed in.
cylinder clip n. a spring steel device used to secure some types of cylinders

In order to make use of a cylinder, we must find a way to transmit the motion of a turning plug so that a lock mechanism or door related hardware can utilize it. For cylinders, this is accomplished via actuators.
actuator n. a device, usually connected to a cylinder, which, when activated, may cause a lock mechanism to operate
On cylinders, the actuators come in two types: cam and tailpiece. The general rule of thumb, almost without exception, is that mortise cylinders utilize cams while KIK/KIL and rim cylinders utilize tailpieces.
cam n. 1. a lock or cylinder component which transfers the rotational motion of a key or cylinder plug to the bolt works of a lock


Mortise cylinders utilize cam actuators. These cams screw into the back of the plug. An added function of cams is that they also serve as cylinder retainers.
tailpiece n. an actuator attached to the rear of the cylinder, parallel to the plug, typically used on rim, key-in-knob or special application cylinders