Linus Yale Jr. formed the Yale Lock Manufacturing Company with Henry R. Towne in 1868. Yale flourished and by 1953 the company decided it was necessary to decentralize the manufacturing facilities of the Yale Lock and Hardware division. New plants were built in Gallatin, Tennessee, Lenoir City, Tennessee, Monroe, North Carolina, and Salem, Virginia. One employee of the Salem plant, which focused on automotive and industrial locks, was Roy C. Spain. By all accounts, Spain was a gifted inventor. Spain had many patents issued between the 1940s and 1960s. These patents included:

During his time at Yale, Spain partnered with Paul A. Powell to form a tool and die company known as the Mechanical Development Company. Originally started in Spain’s basement, the company would eventually relocate to a standalone building not far from the Yale plant in Salem. Sometime during this period, Elvis C. Flora and Roy N. Oliver joined the Mechanical Development Company. According to a Medeco company presentation, Flora and Oliver, upon learning that Spain had created a prototype of key that used angular cuts, urged Spain to fully develop the his lock concept. Spain would eventually leave Yale and devote himself full time to his company and idea. Not long after this, the Mechanical Development Company produced what would become the “Medeco Original”, or Medeco’s original high security platform.

Prototypes of the design were manufactured and then sent to various manufacturers throughout the U.S., presumably to gauge interest as well as find out if any manufacturer was interested in mass production of them. No manufacturers were, however, believing that it couldn’t be manufactured in an economical and consistent manner. Since the group had already created a number of prototypes and proven to themselves that it could be, they decided to begin selling them under a new business with a new name: Medeco, taking the first two letters from the original companies name. 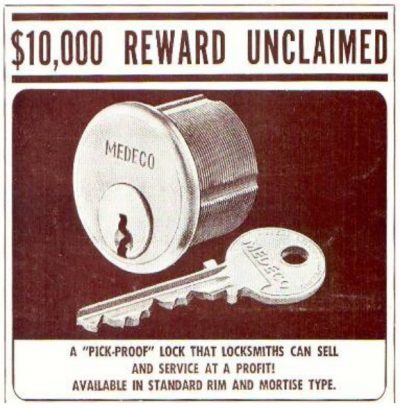 Medeco became wildly successful marketing and selling their “original” product and would eventually become the largest manufacturer of high security locks in the United States. At some point in the early 1970’s, Spain, then President of Medeco, issued the infamous $10,000 challenge to anyone who could pick open their cylinder. NYC detective Bob McDermott successfully picked one cylinder but since he could not do it twice, which the challenge supposedly stipulated, he was not able to cash in. McDermott was hired as a sales rep for Medeco shortly thereafter.

In 1974, Oliver became the president of Medeco, which soon opened a 58,000 square foot facility in Salem. This facility is a few thousand feet from the banks of the Roanoke River. Roanoke is an Algonquian word that, according to English explorer John Lawson and most in academia, translates to… money. Medeco’s success continued and they soon became the preferred choice of many U.S. government facilities, including embassies abroad. In 1984, Medeco was sold to Hillenbrand Industries Inc. In 1998, Hillenbrand Industries sold Medeco to ASSA ABLOY. Today, Medeco still operates successfully as an ASSA ABLOY group company.

And as for the Mechanical Development Company? Their existence didn’t end with the creation of Medeco. Powell’s family now owns the company and they’re still in business in Salem, not far from Medeco’s current headquarters and the original Yale plant, less than a thousand feet from the Roanoke.

Special thanks to Billy B. Edwards for his insight on some items discussed in this article.