Frank Ellison Best was a high school custodian for a large high school in Washington state (incorrect, see update below). His key ring reportedly carried upwards of 100 keys, one for virtually each door. When a key was lost for one of these doors/locks, Frank was tasked with rekeying it. Frank was determined to create a better lock that allowed for a faster and more economical rekeying process. For 7 years, Frank tinkered with ideas. In 1922, he applied for patents for two of those ideas. The first (1,500,297), filed in February, secured a “figure 8” core into a cylinder housing by use of a screw. 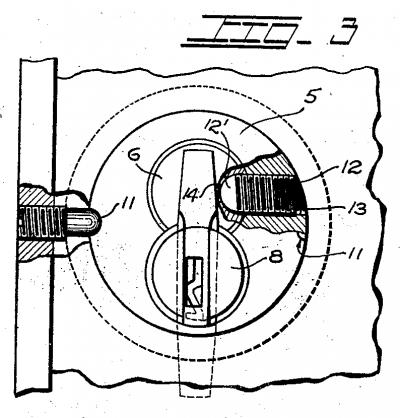 The second (1,561,771), filed a month later in March, secured a similar “figure 8” core into a cylinder housing as well but rather than rely on a screw it used the core’s “extending shoulder”. This extending shoulder is what is commonly known as the “control lug” today. Furthermore, this extending shoulder could be retracted by use a special key, eventually known as a “control key”. This meant that a core could be removed and replaced in seconds with nothing more than a key. It’s not hard to imagine which core eventually caught on.
Frank would go on to form Frank E. Best, Inc., which became the patent holder for his core and other patents. Best would also create a separate company, Best Universal Lock Corporation, in 1925 to manufacturer and sell his new core and locks. In 1938, Best and his company would relocate to downtown Indianapolis, Indiana, where the company remains to this day.

In 1966, Frank Best passed away. Frank left behind quite a legacy, accumulating 58 patents for locks, keys, and lock related equipment throughout his life. Frank Best’s oldest son, Walter, became President of Best in 1966 and held that position until 1994. Best Lock Corporation’s mechanical lock hardware line was fully developed during Walter’s tenure. According to Best company literature, Walter saw sales grow from $4.5 million in 1966 to $104.6 million in 1994. Keying systems using Best’s “small format interchangeable core” became synonymous with many institutions such as schools, hospitals, colleges and universities, government offices, and even military installations.
Russell Best, Frank’s grandson, acquired Best Lock Corporation in May of 1994 from his father Walter. In November 1997 Best Lock Corporation became Best Access Systems. On November 25, 2002, Stanley Works purchased all of Russell Best’s holdings to become the new owner of the company. The company became Stanley Security Solutions although they continued doing business as Best Access Systems. In 2010 Stanley Works and Black & Decker would merge to become Stanley Black & Decker. On February 22, 2017, Best was acquired, along with other Stanley Black & Decker mechanical security businesses phi Precision and GMT, by dormakaba. The deal was worth $725 million. Throughout it all, Best Access Systems remains one of the premiere lock manufacturers in business today.

Man oh man did we get some details wrong. Not long after this was posted, we received a copy of Frank Best’s obituary (posted below) from Zach J. Olson through a mutual friend. A few corrections therefore must be made using this new information:

The story of Frank being a janitor is one that is repeated throughout this industry; in fact, it’s the first sentence on the current BEST Access “About BEST” web page. I hope this was in error on their part because honestly, the true story is far more interesting and far better than what I, and many others, have been told about the man. We apologize for any confusion we may have created. Thank you for the update Zach! 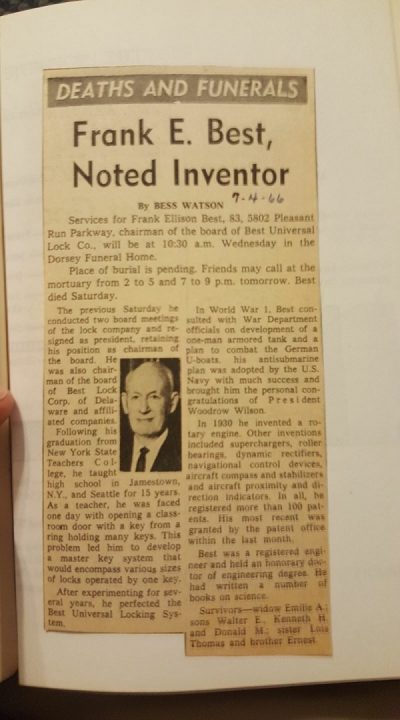