I would personally consider the 19th century as the “golden era” of lock innovation and discovery. The first half of the century, or at least a large portion of it depending on who is defining it, was part of the Industrial Revolution. New manufacturing processes and factories allowed for innovation and inventions never before seen. Men like John Wilkinson and Henry Maudslay helped usher in a new wave of development in machining and tooling. Among the Wilkinson’s and Maudslay’s of the world were the Blake brothers of New Haven, Connecticut. On December 31, 1833, they received a patent for their “escutcheon latch” which was, for all intents and purposes, the forerunner of the modern cylindrical lock.

The “escutcheon latch” was a radical departure from the norm of the time: the mortise lock. Rather than a lock case operated by a key and/or auxiliary trim, the escutcheon latch contained a latch and knob trim that were much, much smaller and utilized a door prep that paled in comparison to it’s mortise counterparts. To quote lock historian Thomas F. Hennessey, “This type lock was almost one hundred years ahead of its time as it did not become popular in the lock industry until the 1930s.” While the “escutcheon latch” never caught up, other inventors sought to create their own version of what could compete with and perhaps even replace the mortise lock. Other early patents related to modern cylindrical and tubular locks included:

In 1923, however, Walter Reinhold Schlage, a German who immigrated to the United States and created his own lock company, filed a patent for what we now call the cylindrical lock. Walter’s version utilized knob trim, and relied on a just two small holes in the door to install. This patent wasn’t the first or last Walter received for a version of a cylindrical lock, however. Others included: 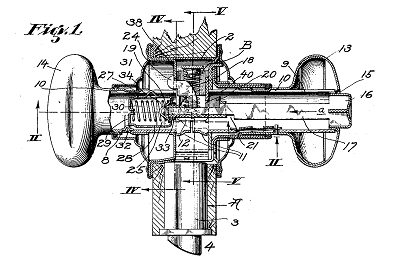 With his design, Walter was able to successfully challenge the mortise lock, the de facto standard for doors, exterior and interior, found in American residences. Schlage’s invention allowed doors to be fitted with a lock at a fraction of the time and cost of mortise locks. Furthermore, largely due to his companies’ existing manufacturing capabilities – which were able to manufacturer 20,000 locks a month by 1925, Walter was able to mass produce the lock. The lock became a hit and locks in America would never be the same. The cylindrical lock still remains the overwhelming standard in American residential construction. It also has a very large market share in commercial construction as well.

Over the course of his life, Walter Schlage was issued an astounding 250 patents related to locks. In 1946, Walter died but his companies continued to flourish. Schlage continued to expand and purchased other lock and door hardware companies, such as LCN. In 1974, Schlage was acquired by Ingersoll and Rand and in turn acquired new manufacturing facilities in New Zealand (1975) and Colorado (1976). Schlage would relocate it’s administrative offices to Colorado in 1997 while keeping it’s Technical Services and Customer Services divisions in San Francisco. In 2013, Schlage, along with 23 other global brands, were acquired by Allegion, where they still operate to this day.