Philo S. Felter might be one of the most underrated and unknown innovators in the history of locks. In March of 1868 Philo received a patent for one of the earliest, if not the earliest, wafer tumbler lock designs (Patent No. 99,013). On August 24, 1875 Philo was issued a patent for another revolutionary cylinder design. Philo’s cylinder utilized a locking bar to prevent plug rotation. Philo called it a “fence-bar”, we know it today as a sidebar. When the proper key was inserted it would lift the “notches in the tumbler” to the proper height to accept the fence-bar. Once this happened, the fence-bar could enter the plug far enough to allow the plug to be rotated.
Taking things a step further, Philo implemented multiple “false notches”, or what we now call false gates, in each tumbler. This greatly added to the lock’s pick-resistance. Additionally, if taking the patent at face value, the new cylinder design was to be paired with rim night latches, which were very popular at the time.
Unfortunately, the sidebar design never really caught on at the time. The sidebar concept laid largely dormant in the American market for the next 58 years. Then, as fate would have it, a new mind revisited the concept.The gallery was not found! Patent Number: 1,965,336 (Google Patents)
Issue Date: July 3, 1934
Inventor(s): John W. FitzGerald
Enter John W. FitzGerald. In July of 1934, FitzGerald received a patent for a wafer tumbler lock design that utilized a sidebar. Utilizing 4 different depths (eventually growing to 6) across 6 positions, this new design offered a great number of possible bitting combinations and, unlike the popular pin tumbler automotive locks at the time, it was very, very pick-resistant.
FitzGerald, unlike Philo, had perhaps the greatest series of circumstances that would ensure that his design would flourish:
First, it was the 1930s. Bootlegging, bank robberies, and automobile theft occurred at an alarming rate. Gangsters, mobsters, and crime rings were rampant; criminals like Al Capone, Bonnie and Clyde, and Dutch Schultz were mainstays in the newspapers of the day for their “activities”. As a result, automotive manufacturers and insurance companies were looking to protect automobiles as much as reasonably possible. A lock that offered greater pick-resistant than it’s contemporaries was right up their alley. 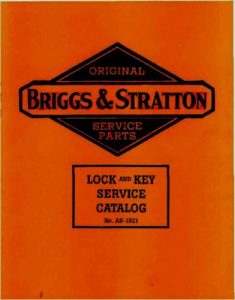 Second, FitzGerald was an employee of the Briggs & Stratton Corporation. By the end of the 1920s, Briggs & Stratton had manufactured and shipped more than 11 million automotive locks to nearly 130 manufacturers, including Chrysler, the Dodge Brothers, Ford, and General Motors. At the time, they were largest manufacturer of automobile locks in the world. Needless to say, the design was in the right hands.

In 1935 Briggs & Stratton began selling it’s new sidebar lock to General Motors. It quickly became a hit and would go on to be perhaps the most popular automobile lock ever made, appearing in all GM models for the next 50 years.
Sidebar designs didn’t end with the Briggs & Stratton and GM; other automotive manufacturers, such as Chrysler and Ford, began to utilize sidebar locks as well. Sidebar designs would find additional, widespread usage in high security locks. High security locks utilizing a sidebar include:

Much like the Blake brothers and the cylindrical lock, Philo S. Felter’s design was well ahead of it’s time. And while Philo might not have received his rightful “due” for this sidebar design, there is a lot to be said about an idea that, nearly 150 years after it became a reality, continues to be a hit.