1. Insert the control key into the lock and turn it 90° to the right (clockwise) to the horizontal position (see Figure 6-1) to unlock the front lock assembly from the mounting bracket.

2. Remove the front lock assembly from the mounting bracket by pulling it away from the door.

3. While holding the lock in your hand, turn the knob to the left (counterclockwise) to the stop position and release.

4. Enter the existing combination. Make sure you depress each button fully and release. Note: For new installations, factory code is 2 & 4 pressed together, release, then 3 and release.

5. Use your finger to depress the lockout slide as shown in Figure 6-2 (a slight click should be felt). 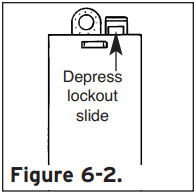 6. Rotate the turn knob to the left (counterclockwise) to the stop position to clear the old combination, then release.

7. Depress the buttons of your new combination and release; a slight click should be felt when depressing each button. You can easily set a new combination using any or all buttons, in any order, separately and/or pushed at the same time as other buttons. You cannot use the same button more than once in a combination.

8. Turn the knob to the right (clockwise) to the stop position to activate the new combination and release.

10. Turn the control key to the left (counterclockwise) to the vertical position. The front lock assembly is now locked in place.

11. Enter the new combination and rotate the turn knob to the right (clockwise) and hold. Make sure that the panic device latch is fully retracted; then release the turn knob.