1. Changing Combinations: In order to change an existing combination, you must:

2. Any or all buttons in any order, separately and/or pushed at the same time can be used in your new combination. Each button can only be used once in the combination. 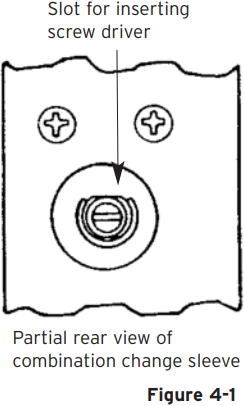 4. Turn outside thumb turn counterclockwise (to the left) to stop position and release (See Figure 4-2). This will clear the lock of previously depressed buttons.

5. Depress the buttons in the existing combination making certain each button is fully depressed and released.

7. Clear the lock of old combination by turning the thumb turn to the left (counterclockwise) to the stop position. Release the knob.

8. Depress the buttons of desired combination carefully, making sure that a click is felt with each button(s) that is depressed, and release.

11. Before closing door, activate new combination and turn the thumb turn to the right (clockwise) to ensure proper retraction of the latch (See Figure 4-4).