So maybe you bought out the old shop across town or found a lot of new-old-stock on eBay that was too good to pass up. In that lot there are some good keys but they are tarnished and ugly and customers will not like them that way.

There is a fair amount of locksmith lore out there on how to clean the tarnish off.  Those methods were tried along with some new methods to finally find two foolproof ways to get the tarnish off without spending a lot of time at it.  The methods fell under three main categories:

The first methods tried were chemical cleaning.  The chemicals were as follows: 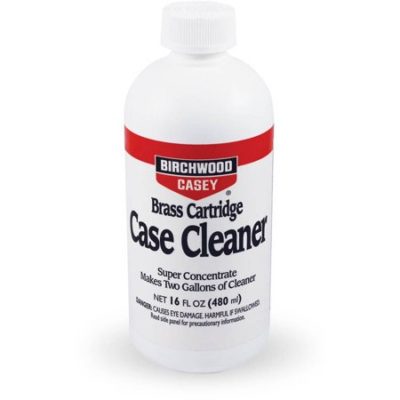 Some of these ranged from free (ketchup packets from the drive through) to $8 for 16oz of concentrated solution in the case of the Case Cleaner.  Tarnished keys were submerged in each liquid overnight.  The bottom line was that all of them removed some tarnish, but none of them really made brass keys look like new.  At best they left a pink tint where the tarnish used to be.  If you only have light tarnish, Ketchup  or vinegar worked as well as anything.  The Case Cleaner was a disappointment, as it seems like it should have worked better than it did. 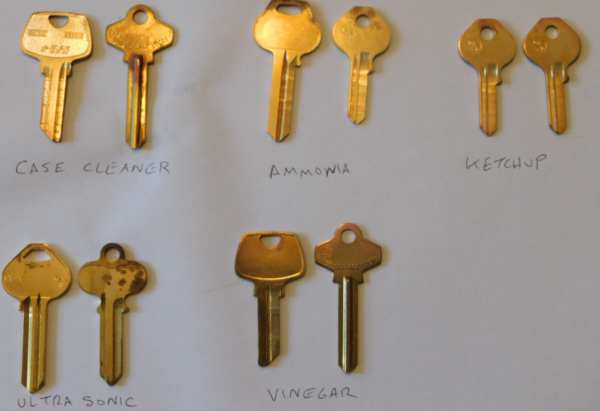 After photos of various chemical cleaners – still not that great. Ketchup and Vinegar worked as well as anything.

After the disappointing results from the chemical cleaning, the next round of testing used manual means to finish up the tarnish left by the chemical methods.  Two brass cleaners were used with a cotton towel to scrub off the tarnish: 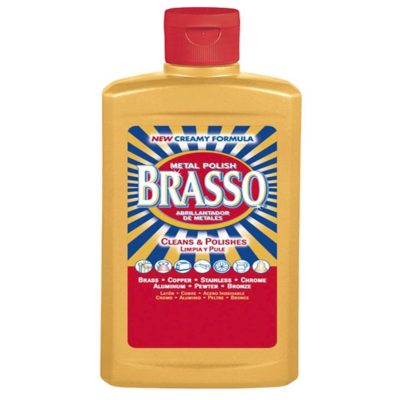 They both worked, but it was work.  Had to apply some polish to a rag and rub each key vigorously, then wipe the polish off completely.  The Brasso had a strong ammonia odor.  The Simichrome put on an incredible shine—the keys had a mirror finish afterwards, but again, a lot of work if you have a lot of keys. 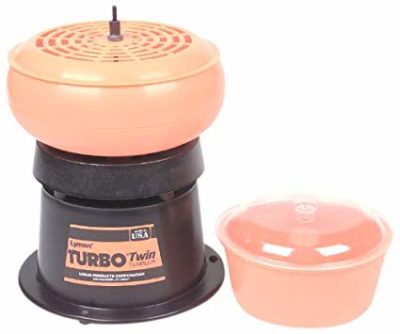 Lyman Twin Tumbler vibratory cleaner; bowl to right is for use with liquids.

Fortunately, these tools were already owned for other purposes.  The word fortunate is used because neither really worked!  The ultrasonic cleaner was ran through two of the longest cycles it had, at full heat.  The cleaner was meant to clean antique clock parts, but just did not do much for the keys in question.  The vibratory cleaner shined them up a bit after a few hours, but it still left the worst tarnish behind.

Things were looking kind of helpless at this point but then I remembered that coin collectors sometimes use a vibratory cleaner with aquarium gravel and water to remove stubborn corrosion.  So that was tried next.  It was better, but not quite perfect.  It needed a little something extra.  On a hunch, added a tablespoon or so of Bon Ami (a powdered limestone cleaner used for stubborn stains on pots and pans). 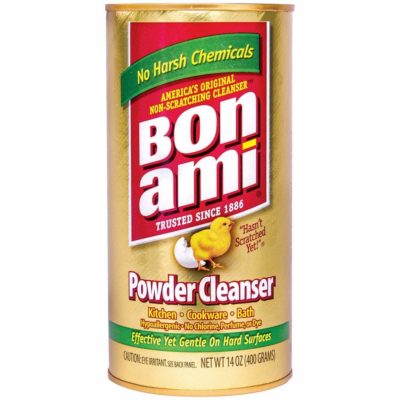 The keys came out spotless for once.  It just needed that barely abrasive quality from the Bon Ami.  There was one snag: some small bits of gravel would sometimes lodge in the millings of keys and would have to picked out with a pin.   Also, I discovered that the minute I turned off the vibratory cleaner, the keys needed to come out and be rinsed under fresh water then patted dry, or they would tarnish up worse than ever.  The vibratory cleaner was not that loud and could be left running behind a counter without bothering anyone.

Finally a slight success, but was there another method that would not require bits of gravel to be picked out of groves on keys?  Turned out there were two.  The first method used a rotary tumbler with a few pounds of short stainless-steel pins and water.  People who reload cartridges swear by them these days.  Well, it worked, but mainly I swore at it.  It was hard to keep the lid on tight enough—too lose and water spilled out.  Too tight and the plastic was liable to break.  It was really loud.  Hear it across the street kind of loud.  The keys did come out perfectly tarnish free, but the whole thing was messy, as you had to use screens to separate the keys from the pins from a soup of murky water.  If one does not mind the mess, they have some place where they can run the thing where noise is not a problem, and they have a spare $160 lying around, it is a workable method.  You can run a hundred keys or more at once through it.  But, do not try it with them bunched together on metal shower curtain rings—they need to go in separated.  The unit is equipped with a built-in timer.

The two methods that worked so far cost a good bit of money and were kind of messy.  Could there be some simple way of doing this?  One could use steel wool and do it by hand, but that is a lot of work and it is hard not to leave scratches.  A wire wheel brush would work great, but they would leave really bad scratches.  But what about a really soft wire wheel brush?  It turns out that Grobet (the guys who make pippen files just right for impressioning) also make rotary wire wheel brushes that are extremely soft.  Last experiment was to get a Grobet wire wheel that use 3 thousandths of an inch thick wires.  The Grobet part number is 16.458.  Midway USA and Brownells, both gunsmith supply houses, carry them.  It does not come with a spindle, so a long bolt and a nut were used to make one.  It was chucked up in a small drill press and turned on at a medium speed.  With spinning wire like this, safety glasses are a good idea.  Now this method does require one key at a time to be held against it and cleaned, but it really works.  Less than a minute to clean up a badly tarnished key, and it seems to magically remove the tarnish without leaving a single scratch on the key.  It has turned out to be a sort of wonder tool in the shop—it can clean rust off of chrome plated items without scratching the chrome.  It took a badly rusted pocketknife that someone was about to throw away, and made it almost look like new.  I accidently touched the spinning wheel once or twice with by bare hand, and it did no damage at all (do not try this).  It seems to remove corrosion and tarnish and leave everything else alone.

So, the final word in cleaning tarnished keys is to get a soft Grobet wire brush and chuck it up in a drill.  One of the cheapest solutions was the quickest, and it might be useful for other things as well. What about you? What have you removed tarnish with? What do you suggest?

About the Author: Wayne Winton